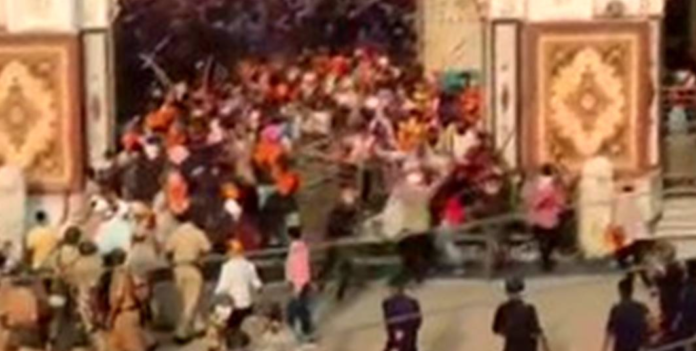 A sword-wielding mob went on a rampage outside a gurdwara and attacked policemen after being denied permission to hold a public procession in Maharashtra’s Nanded due to the coronavirus pandemic.

At least four policemen were injured and several vehicles have also been damaged in the rampage.

Religious gatherings were barred in the area given the spike in COVID-19 cases. But the crowd of about 300 to 400 people tried to enter the gurudwara, breaking the police barricades.

Superintendent of Police Pramod Kumar Shewale said that permission for the Hola Mohalla public procession was not granted due to the pandemic.

“However, when the Nishan Sahib was brought at the gate around 4 pm, several participants started arguing and over 300 youth stormed out of the gate, broke the barricades, and began attacking the policeman,” he added.

Nanded Range DIG, Nisar Tamboli, also informed that till now 17 people have been detained by Nanded Police in connection with the assault and an FIR has been registered against at least 200 people under sections 307 (murder attempt), 324 (voluntary causing hurt with dangerous weapons), 188 (Disobeying the order of public servant), 269 (Negligent act likely to spread infection) of the Indian Penal Code (IPC).