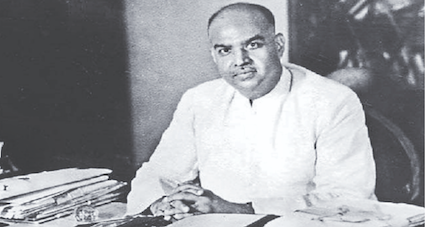 An untimely death of a political leader — whose career is just blossoming — is always a loss to the party they belong to, the ideology they espouse, or the cause(s) they pursue.

He has asked for an inquiry commission headed by a retired Chief Justice of India. Sharing the details of the petition, Chowdhury said the application will come up for hearing by the end of July. He questioned why Mookerjee was detained without trial by Sheikh Abdullah’s government after his arrest in Kathua on May 11, 1953.

He further added that as per government data Mookerjee died in custody of Jammu and Kashmir Police but he was diagnosed with a heart attack and was taken to hospital.

“I am surprised at the silence, we must know how Mookerjee died,” said Chowdhury.

When Mookerjee was arrested in 1953 with two of his companions his condition started deteriorating and was diagnosed with dry pleurisy from which he had also suffered in 1937 and 1944. The doctor prescribed him a streptomycin injection and powders, however, Mookerjee informed him that his family physician had told him that streptomycin did not suit his system.

Considering that, In his petition, Chowdhury asked the government to investigate why medicines were administered to him despite his refusal.

He said several inquiries were held into the circumstances of Mookerjee’s death but all remain inconclusive. He mentioned that said  an Assembly member from the Congress party, Shankar Prasad Mitra, moved an amendment to this resolution asking for the words “for holding an inquiry”, to be substituted with “for requesting the Government of Jammu and Kashmir to hold an inquiry”. However, Bidhan Chandra Roy, then chief minister of West Bengal, declined the move for an inquiry.

The Bengal ministry in their resolution pointed that it wouldn’t be right to pursue a matter which concerned the Government of J&K alone.

“The resolution passed by the West Bengal Legislative Assembly is consistent with this stand since it only asks the Government of India to pass on the request to the Jammu & Kashmir Government,” it added.

However, when the Ministry of States forward the resolution to the Chief Secretary of Jammu and Kashmir on September 22, 1954, it yielded no results.

In August 1954, Ghulam Ahmad, chief secretary of Jammu and Kashmir in his letter addressed to V. Narayanan, joint secretary to the GoI (Ministry of States) pointed out how Dr B.C. Roy, who went there for inquiry “visited various beauty spots in the Valley”. He said no official inquiry was held by him as such no report could have been submitted by him.

Not only this, in 2004 former prime minister Atal Bihari Vajpayee also claimed in Parliament that Mookerjee was murdered in a “Nehru conspiracy”.

Citing the same, Chowdhury questioned, “Would you not probe the death of the father of your party? Strangely, the BJP did nothing to uncover the mystery,”

All eyes are now on the Calcutta High Court. If the PIL is admitted, then work will start on one of India’s biggest political mysteries. If not, the father figure of the BJP will be remembered during the lighting of lamps during mega functions.