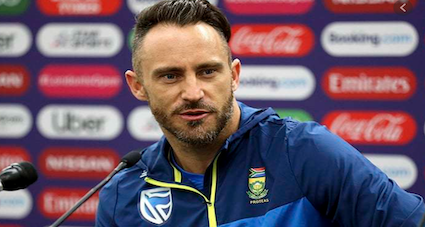 Former South African captain Faf du Plessis has said that T20 leagues around the world pose a real threat to international cricket, and the day is not far when the format of cricket will be like soccer.

“It’s a threat to international game. The power of the leagues that are growing year by year, like in the beginning there were two leagues around the world now its higher in number. The leagues are just getting stronger.

“So I think it’s important to see how in the best possible way you can co-exist because I think it will become a choice moving forward to the future that it can be a real threat to the international cricket.

“May be in 10 years’ time cricket will almost be like soccer, where you have global events in between you just have leagues around the world,” said Du Plessis.

“Someone like myself you go and play two or three leagues around the world but there is a block every year, so maybe something like that the game is going.

“Obviously, I can’t predict the future but West Indies was the first who started doing it. All of their guys moving away from the international team to the T20 domestic circuit.

“It is starting to happen with South Africa, you can see over the last years or so Imran Tahir, Chris Morris, myself even AB de Villiers are moving that way. So, I think there needs to be a way where you can try and work with both,” added du Plessis.

Du Plessis, while speaking to Cricket Pakistan, said that while IPL brings some amazing spin bowlers to the forefront, PSL must be credited for producing quality pacers.

The former Protea skipper said the standard of PSL is “very good” and quality fast-bowlers, who play in the tournament, impress him the most. Du Plessis said that he was “surprised” to see the number of pacers who can consistently bowl 140-plus.

(This is a modified version of the report which appeared in RepublicWorld).