Talks fail; another round on Saturday as farmers show take-it-or-leave-it attitude 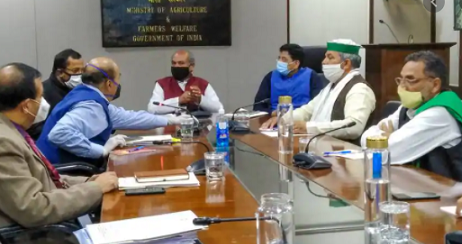 The talks between the Centre and the agitating farmers ended in a deadlock on Thursday as the latter have a take-it-or-leave-it attitude. The next round of talks, due on Saturday, is also unlikely to provide a breakthrough due to the high-handedness of farmers.

The farmers warned the government after today’s meeting that it was their “last chance” to call a special session of Parliament and repeal the three contentious laws. The Centre, on the other hand, has kept its cool, best illustrated in the words of Union agriculture minister Narendra Tomar: “The government has no ego.”

Tomar requested farmers to call of the stir, reiterated giving farmers “more legal rights” as well as an assurance that the “MSP would continue” but the farmers would have none of it.

The farmer leaders who had gathered for the meeting at Vigyan Bhavan this afternoon indulged in high theatrics by refusing to have lunch with the Centre’s representatives, insisting on having food of their own which some of them took squatting on the floor.

The Centre reportedly has considered farmers’ demand to approach the courts in case of a dispute over contract farming and not leave it at the mercy of a Sub-Divisional Magistrate. But the farmers seem to have made up their minds.

They are of course being egged on by drama on the sidelines with former Punjab chief minister Prakash Singh Badal returning his Padm Vibushan in protest. So did hockey star Pargat Singh who returned his Padma Shri.

The day began with Punjab chief minister Amarinder Singh meeting Union home minister Amit Shah, later claiming that he wanted both sides to resolve the issue as it affects “the economy of my state and security of the nation.”

The effect of this showdown was visible on road. The Delhi-Meerut Expressway was shut by incoming tractors and trucks clogging the roads. The Chilla border was also blocked for Noida to Delhi passage on one side. The National Highway-9, another entry point to Delhi has been closed. The DND flyway to Noida, however, is open.