‘Tandav’ now has a case against by UP police; ‘Prepare for arrests’ 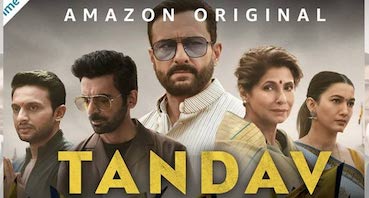 “Tandav”, the web-series on Amazon Prime, could well be the moment when openly Hinduphobic content on the Over The Top (OTT) platforms, a strategy which pays them rich dividends by way of publicity and propaganda, is made accountable.

The Uttar Pradesh police has filed a case against the makers and Amazon Prime for alleged insult to Hindu gods and arrests could happen soon.

The case was filed hours after the ministry of information and broadcasting sought a response from Amazon Prime on a complaint filed by a BJP MLA from Maharashtra, Ram Kadam.

The charge against the writer, producer and director of “Tandav”, starring Saif Ali Khan and Dimple Kapadia is that they have promoted religious enmity and defiled a place of worship in their depiction.

A sub-inspector in Lucknow’s Hazratganj police station has filed the complaint.

Little time was lost in media advisor of UP chief minister Yogi Adityanath, Shalabh Mani Tripathi tweeting a copy of the complaint on twitter.

“There is no tolerance for playing with people’s sentiments in Yogi Adityanath’s Uttar Pradesh. A serious case has been registered against the entire team of Tandav, which is spreading hate in the guise of cheap web series. Prepare for arrest,” he wrote in Hindi.

The complaint states that 17 minutes into the first episode, “people dressed up in a very bad manner to represent Hindu gods and goddesses and have been shown to speak in a very uncalled for language… that hurts religious sentiments”.

In the same episode there are “conversations that lead to caste conflict, there are similar scenes in many other episodes. In the web series, the character of the person occupying the high post of India’s Prime Minister has been shown in a very indecent manner… The series depicts lower and higher castes and scenes that insult women, and the intent… seems to be to hurt religious feelings of one community and to spread conflict”, the complaint reads.

Twitter has been trending with hashtags of #BanTandavNow and #BoycottTandav since the web-series was released last week.

A character is shown acting Lord Shiva and holding Trishul in a college theatre festival, mocking “ram-bhakts” and followed by “Azaadi” slogans from the audience.

Why someone needs to take help of Hindu gods for making a movie ?#BoycottTandav pic.twitter.com/3QIKerxyTM

Another scene depicts a high-caste woman leaving her husband for a lower-caste lover to which the husband quips: “When a lower-caste man dates a woman belonging to a higher caste, he is expecting revenge for centuries of oppression through just that one woman.”

Another insinuating moment is when it’s suggested that police find it easier to brand Muslims as terrorists to justify their killings.

Saffron police always picks up innocent Muslims and kills them on fake charges of terrorism.

Is this film by @aliabbaszafar funded in India or by Pakistan? pic.twitter.com/byWq4QY6K4

A Telugu film on Netflix shows a male character named Krishna having sexual intercourses with many women, including one named Radha.

Another one, on Zee5, has a Tamil web series “Godman” and the blowback by netizens, including BJP MP Subramanian Swamy, was so fierce that the platform had to suspend the release of the controversial web series.