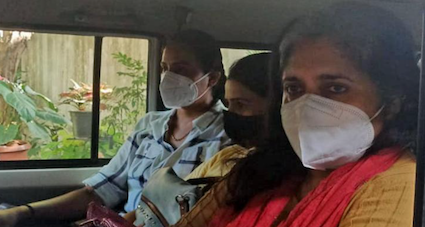 Activist Teesta Setalvad was taken into custody by the Gujarat Police’s Anti-Terrorism Squad from Mumbai on Saturday, news agency ANI reported, a day after the Supreme Court lashed out at those who had “kept the pot boiling” on the 2002 Gujarat riots.

The strongly-worded Supreme Court judgment was seen as an allusion to Setalvad’s NGO that had extensively been involved in it.

Setlavad was a co-petitioner in the case that was dismissed by the Supreme Court on Friday that challenged Prime Minister Narendra Modi’s exoneration.

Zakia Jafri, wife of Congress MP Ehsan Jafri who was killed in the riots, was the main petitioner.

Upholding the clearance to PM Modi, then Chief Minister of the Gujarat, by a court-appointed Special Investigation Team or SIT, the Supreme Court said the case was “devoid of merits” and was filed “obviously, for ulterior design”.

“All those involved in such abuse of process need to be in the dock and proceeded with in accordance with law,” the judges said, surmising that the appeal was filed under “dictation of someone”.

“Antecedents of Teesta Setalvad need to be reckoned with and also because she has been vindictively persecuting this lis [dispute] for her ulterior design by exploiting the emotions and sentiments of Zakia Jafri, the real victim of the circumstances,” the top court said in its order.

In the past, after PM Modi came to power at the centre, Setalvad has had run-ins with the CBI and Gujarat Police, over allegations of financial misappropriation at her NGO.