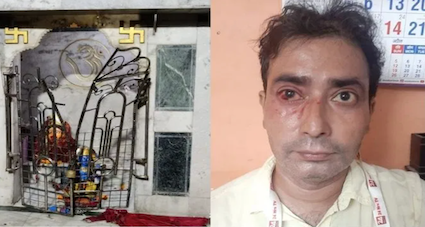 A huge police contingent was deployed in the Chandannagar and Ballygunge Tiljala areas in Kolkata after a Shani Kali temple was vandalized by Islamists, according to a Hindustan Times report.

DCP (South-East Division) Sudeep Sarkar and other senior officials were also seen on the spot.  One of the police officers confirmed that “There is communal tension in Tiljala. We are holding a peace meeting.”

BJP worker, Devdutta Maji, informed about the incident through his Twitter handle where he shared a video of the incident also. Video shows how policemen were making arrests, resorting to baton charges and a police vehicle was being vandalized by a group of youth. Not only did the Muslim mob attack with stones and sticks the Hindus and destroyed their properties, they also vandalized and desecrated a Hindu Temple in the locality.

West Bengal governor Jagdeep Dhankhar was among the first ones to react to the video. He took to Twitter to question the law-and-order situation in the state.

“Administration @MamataOfficial must take all steps to maintain peace and calm in Chandannagar and in Ballygunge Tiljala area. Stern message to police @KolkataPolice @WBPolice @HomeBengal must be sent to contain sliding situation.Time to hold concerned accountable,” he tweeted.

Administration @MamataOfficial must take all steps to maintain peace and calm in Chandannagar and in Ballygunge Tiljala area.

“The state of collapsing law and order @MamataOfficial can be assessed from the scenario that MP @me_locket was subjected to such treatment with hooligans coming too close to MP’s vehicle with aggressive posturing & on occasions also smacked the car with hand. Police inaction!” Dhankhar wrote in another tweet, referring to Bharatiya Janata Party (BJP) MP Locket Chatterjee’s visit to Chandannagar.

Journalist Sanjeep Basu was brutally attacked by assailants when went to cover the attack by a mob of Islamists on Hindus and Hindu Temple in Tiljala. He suffered serious injuries in his right eye, with blood clots in the eyeball. He says he was attacked so severely that he might have ended up dead had he not been rescued.

“We had received a tip-off about a law and order situation in Topsia Hazaribagh. When we reached there, I and my co-worker were beaten black and blue by the miscreants. I was badly hit in the eye (pointing towards his sore eyes). Then, a few local men intervened and rescued us,” he said.

Launching a direct attack on TMC goons, BJP MLA and leader of the Opposition in the West Bengal State Legislative Assembly, Suvendu Adhikari, tweeted, “Journalist Sanjeeb Basu was following up on a reliable lead that Hindus were being targeted today at Tijala area in Kolkata. The atrocities were not limited to people and properties, even Hindu temples were attacked.

He further stated, “While covering the news journalist Sanjeeb Basu was brutally attacked. I strongly condemn this incident which is an onslaught on people for exercising their democratic rights and attacks (sic) free journalistic liberties”.