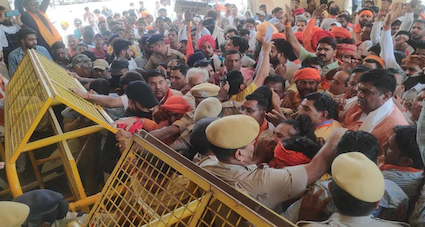 In a major development in the Alwar temple demolition, the Vishva Hindu Parishad workers have now staged a major protest in the district.

The VHP protestors held a Paidal March against the Ashok Gehlot-led Congress government in the state.

This comes only days after the demolition drive carried on in Rajasthan’s Alwar that saw a 300-year-old temple in Alwar has its building areas razed to the ground. The protestors demanded chief minister Ashok Gehlot’s resignation over the incident.

Furthermore, the protestors called it a targeted attack on a community. The protestors also slammed ongoing exchange and demanded a fair probe into the issue. Meanwhile, a standoff also broke out at Alwar Collector’s office as Bharatiya Janata Party held the Jan Aakrosh Rally against the Gehlot Govt over the temple demolition. Similarly, members of the Karni Sena have demanded strict action in the matter.

On Friday, the demolition of two temples, among other structures, in Rajasthan’s Alwar district earlier this week created a political storm with the BJP accusing the Congress-led government of hurting the sentiments of Hindus by using bulldozers on temples.

Alwar district collector Nakate Shivprasad Madan said that the board of the Rajgarh municipal council passed the proposal to demolish the illegal structures and the action was taken according to the decision of the local administration, in the presence of police.

The drive has now started a political stir in the state.