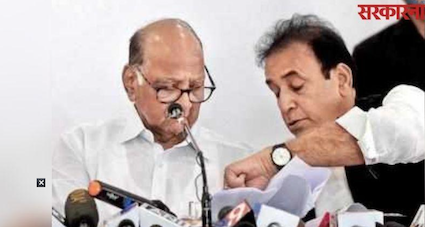 It would’ve been hilarious but for the fact that this is in defence of a man accused of demanding Rs 100 crore per month as extortion money from the police under his command.

Maharashtra home minister Anil Deshmukh, the man at the centre of accusation, had no less than his own party chief, Sharad Pawar of NCP, the centrifugal force in the Maha Vikas Aghadi (MVA) government, come out in his defence in public.

Pawar today told the reporters that Deshmukh was in hospital between February 6-15 and home-quarantined between February 16-27, implying that the charge of ex top cop of Mumbai, Param Bir Singh against his man was nothing but bogus.

If you see the former Commissioner’s letter, he mentions that in mid-February he was informed by certain officers that they got such and such instructions from Home Minister…From 6th-16th Feb, Mr Deshmuklh was admitted in the hospital because of Corona: NCP chief Sharad Pawar pic.twitter.com/9J1PNyZ7Vr

“We will share all these records with the Chief Minister of Maharashtra. The question of resignation (of Deshmukh) does not arise now,” added Mr Pawar.

But social media is an unforgiving place. No sooner had Pawar made the assertion, BJP IT cell head Amit Malviya came out with a tweet, showing Deshmukh addressing a press conference on February 15.

Sharad Pawar claims Anil Deshmukh was in hospital from 5-15 Feb and in quarantine from 16-27 Feb.

But Anil Deshmukh was holding a press conference on 15 Feb…

The assembled reporters lost no time in bringing it to Pawar’s notice, in the middle of his address to them. Pawar’s reaction, to this interjection, is worth a view in itself.

#WATCH: NCP chief Sharad Pawar replies to questions over BJP’s Amit Malviya’s tweet that Maharashtra Home Minister Anil Deshmukh was holding a press conference on Feb 15th, as opposed to the NCP chief’s statement that he was admitted to hospital at the time. pic.twitter.com/7f4lYLIdaV

Now it was Deshmukh’s turn to come to his boss’ defence. The state home minister said that he had actually the press outside the hospital itself on February 15, and that thereafter he had gone straight to his home to be quarantined between February 16-27.

But Malviya was unforgiving. He twisted the dagger that bit deeper in the flesh, so to say.

On 8th February, a delegation of the Congress party met Maharashtra home minister Anil Deshmukh, claiming that influential voices tweeted against anti-India voices, under pressure from the BJP.

Where did the delegation meet Anil Deshmukh? In the hospital?https://t.co/j8twDYAI8t

On February 8, Deshmukh had met a delegation of Congress leaders who were upset at the tweets by celebrities, including Sachin Tendulkar, which ran against the narrative of protesting farmers and international celebrities such as Rihanna.

Thats not all. It seemed there was no reprieve for Deshmukh yet.

Malviya also reproduced a tweet of Deshmukh on February 18 where the latter has condoled the death of one of security guard at his bungalow. Malviya’s words in his tweet are worth a read on its own.

This must be one of its kind of “quarantine” where the concerned is moving about with hundreds of people, including his wife, endangering their lives too just so that he can console a departed souls family. Very humane gesture!

But flies in the face of Sharad Pawar’s claims! https://t.co/cOJmVUs8r6

Former Maharashtra chief minister and BJP leader Devendra Fadnavis wasn’t the one to let go the free hit: “It seems Sharad Pawarji is not briefed properly on Parambir Singh letter. In this letter only, the SMS evidence shows that the meeting date was mentioned as end of February. Now who is diverting the issue.”

Indeed, Param Bir Singh in his letter had never mentioned the exact date of his meeting with Deshmukh in any case. He had just said in and around mid-February.

In his press conference, this is what Pawar said in addition to his faux pas: “The important issue is the Ambani bomb scare case. After the arrests made by the anti-terror squad, it is now clear who killed Hirani, During the investigation it will be revealed why did these two kill Mansukh Hiren…on whose behalf.

“The Mumbai ATS is probing in the right direction. Now to divert that vague allegations have been levelled by Param Bir Singh,” he added.