Thank You India: ‘I trust Bible but didn’t imagine my prayers would be answered so soon’ 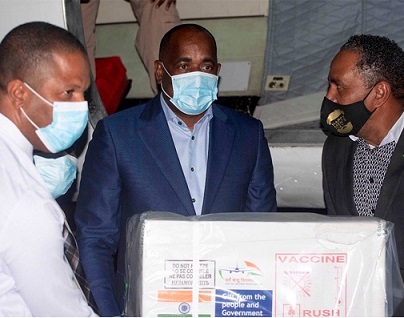 “Even though I trust every word of the Bible, I must confess that I did not imagine that the prayers of my country would have been answered so swiftly. Thank you India” said an emotional Skerrit.

In less than a month, India has sent its vaccine to 15 countries and over 25 countries are in queue, beside the 70 lakh already vaccinated in India.

PM Roosevelt Skerrit had shared a video of the arrival of 70,000 vaccine doses from India on Wednesday and expressed his surprise at the quick answer to his prayers.

I cannot deny that I had goosebumps on seeing this. This is the RIGHT way to project India’s mission & place in the world. Thank you to our vaccine manufacturers & the Govt. for making us so proud. https://t.co/NeeSMguGr1

“I would like to take this opportunity to once again express my heartfelt thanks and appreciation to Prime Minister Modi, his government, and the citizens of India,” Skerrit was heard saying in the video.

“One would have thought and understood that in a global pandemic such as this, a nation’s size and might would have been the primary consideration,” he added.  Skerrit thanked his counterpart, “But to the credit of Prime Minister Modi our request was considered on merit and the equality of our people was recognized.”

Dominica will vaccinate 35,000 citizens through India’s vaccine Covishield, and the process which will start on February  22.

Mahindra said it was the right way to project India’s ‘mission & place in the world.’ He also conveyed his gratitude to the vaccine manufacturers and the Government for ‘making us so proud.’

Under the Vaccine Maitri initiative, Barbados and Dominica have received vaccines from India recently. Neighbouring Bhutan, Maldives, Nepal, Myanmar, and Bangladesh have also been the beneficiaries of the vaccines.