The adroit Yogi has got the monkey off his back: But wolves are still circling 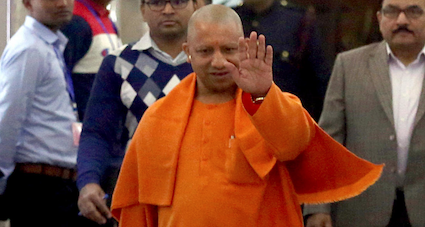 It seems Yogi Adityanath and his State Uttar Pradesh is alone in this battle against the Coronavirus pandemic. A state with a population of 23 crores, showed up only 14k plus cases on Tuesday, the day’s deaths were no more than 98, yet mainstream media is screaming an apocalypse.

As the Second Wave ebbs, there is little doubt Uttar Pradesh has done a remarkable job in containing its spread. A State which has 97,000 villages, and a behemoth population, with limited resources, has come out on top and not the least because its chief minister Yogi Adityanath hasn’t stopped visiting or keeping a tab on scaling up healthcare infra in every 75 districts of the State. The man on the move today says: “I have the date of cases, recoveries, deaths, testing with break-up like RTPCR and private etc on fingertips. I also undertake death audits in districts. Testing data is available of every person.”

The mainstream or Lutyens Media clearly doesn’t like it. Indian Express ran a series on UP battling Covid-19 in recent days with the focus to show it in poor shape. Dead bodies floating in rivers were shown as signs of uncontrollable pandemic. Tin walls in funeral grounds were shown as an attempt to keep the numbers away from prying eyes when it was intended for people to avoid stepping into the contaminated zones. Despite its remarkable turnaround, there are no Uttar Pradesh Model being talked about in media as it is done about Kerala Model or Mumbai Model even though the two states continue to be ravaged by Covid-19 with far lesser populations.

Times of India today has a second lead where it has predicted that Uttar Pradesh would need to up its vaccination drive by nine times if they are to inoculate its entire population by December this year. It is to counter these alarms that Yogi Adityanath is on an interview giving spree to main media houses to curb such mischief in the bud.

So even as Times of India raises heat on UP’s vaccination roadmap, its chief minister uses the same daily to present his viewpoint in inside pages today.

To begin with, Yogi Adityanath reveals that vaccine distribution isn’t happening as per the population of states. It’s been done given the numbers of active cases a State has. So a State with more active cases gets more vaccine doses. Thus it’s been a double whammy for Uttar Pradesh which didn’t get as many vaccine doses as it deserved on the strength of its population. But Yogi says its being rectified now.

As per Yogi Adityanath’s calculation, if the Centre is looking to provide 30 crore doses to States/UTs every month, Uttar Pradesh should get a fair supply of them. So for it has inoculated 2.3 crores. Yogi sees vaccine supply increasing dramatically in July and August. If it so happens, we could administer 10-12 lakh doses a day and could’ve 10 crores vaccinated in three months, reasons Yogi Adityanath.

But then there is this issue of who administers the doses. Uttar Pradesh has thus suitably ramped up training second and third year nursing and pharmacy students so they could play the role of administering vaccines to people. He still senses vaccine hesitancy among villagers and hence has ratcheted up the information campaign in State’s 97,000 villages.

The CM Helpline number is being managed by 500 people. Some 1500 workers are taking random feedback. There is an integrated Covid-19 command centre to keep a tab on each district.

Even though active cases are falling in UP, we haven’t reduced testing. It’s still 3 lakhs a day, says Yogi.

The truth is Yogi Adityanath’s Uttar Pradesh has proved everyone wrong. Even Niti Aayog which had predicted that Uttar Pradesh would overtake Maharashtra by mid-May—and that UP would be home to 30 lakh active cases in May.

Though the worse of Second Wave is over, it isn’t to say that Yogi is taking his foot off the gas pedal. He knows the coming months, if anything, could be far more testing. Vaccinating this size of population is a great task and the abiding fear of Third Wave hitting before it’s done is always on the horizon.

We could be sure that Lutyens Media would be losing sleep to find any misstep from Yogi Adityanath. But given the man’s track record, there is a feeling he would come out on tops. Again.