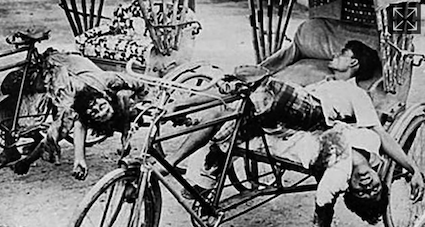 Our western neighbour Pakistan has never prided itself as a beacon of democracy, and first coup was staged there on October 7, 1958, within 11 years of its coming into existence. This coup was effected by President Iskandar Mirza who abrogated the Constitution and declared martial law. It is another matter that he didn’t last a month even and on October 27, Pakistan Army Chief General Ayub Khan deposed him! The first democratic elections were held there in December 1970 and by December 1971, Pakistan had broken into two nations, so fragile was democracy there.

General Yahya Khan, Martial Law Administrator Zulfikar Ali Bhutto, General Zia ul Haq and General Pervez Musharraf played their part in burial of democracy in Pakistan. Each one digging the grave of democracy deeper, and wider so much so that we have Miltablishment ruling the country today. A sort of hybrid democracy where military is all powerful, despite claims that elections are held in the country now and then. Can anyone answer the question as to of the two, Prime Minister Imran Khan and Pakistan Army Chief General Qamar Bajwa, who is more powerful?

Let us look back at the first elections that were held in 1970, long after it came into existence in August 1947. On December 7, 1970, these elections for 300 member National Assembly (akin to India’s Lok Sabha) were held. Of these, 168 were in what was East Pakistan and 132 in West Pakistan. These were fiercely fought between west-based Pakistan People’s Party (PPP) led by Bhutto and east-based Awami League led by Sheikh Mujib.

The results were stunning in that Awami League won 160 out of 162 seats, all in East Pakistan. Besides, it also won all seven seats reserved for women in the eastern wing. In contrast, PPP could win only 81 out of 132 seats in West Pakistan, and five out of six seats reserved for women in West Pakistan. The two parties thus emerged as essentially parties limited to one wing of Pakistan and this created a peculiar situation. After the results, Bhutto said in a taunting manner: Idhar hum, Udhar tum (We rule here, You rule there), meant at cocking a snook at Mujib. This was something which literally came true and perhaps Bhutto had not thought that his words will prove to a self fulfilling prophesy.

People in East Pakistan expected, and rightly so, that Mujib will be called by General Yahya Khan, who had replaced Ayub Khan in 1969, to become the Prime Minister of the country. This was not to be as the National Assembly was not convened after the results were out. Mujib had won a clear majority, as a simple majority meant only 151 seats and the denial of power to him created severe unrest in East Pakistan.

East Pakistan continued to simmer for whole of December-February 1970-71 1and by the fourth week of March 1971. Over 100 days after the results of the elections, on March 25/26, forces drawn from West Pakistan started a massive crackdown in East Pakistan. This led to mass rapes, mass killings and large scale atrocities aimed at Bengali intellectuals. A civil war started and lakhs of refugees, mainly Hindus, started arriving in Indian states on located in the north eastern region.

Operation Searchlight is one of the most horrendous military crackdowns in the history ever recorded and it was carried out by army of Pakistan against its own people. The only crime of these people was that they expected General Yahya Khan and Bhutto to accept the results of the December 1970 elections! The people of East Pakistan had not demanded secession but they were driven to create a separate country for themselves.

The march of refugees into Indian territories caused chaos all over and several politicians urged Indian Prime Minister Indira Gandhi to do something. To stop the heavy influx of refugees, India could effectively do nothing. By mid-April, Mrs Gandhi was so incensed that she started thinking in terms of going to war with Pakistan. She was clear in her mind that waging a war against Pakistan was better, and cheaper, than entertaining a never-ending stream of refugees.

She talked to then Chief of Army Staff General Sam Maneckshaw who refused to go to war with Pakistan immediately. Giving his reasons, he argued that he needed at least six months to prepare for the war she wanted. There were so many variables like monsoons, supplies and spares of weapons, training of soldiers, diplomatic efforts were needed, and all this would take time, he explained. Mrs Gandhi had to listen to her top general even if she didn’t like the answer initially.

Thereafter, she started touring important countries worldwide, met leaders and explained the predicament which India was facing. On August 9, 1971, India signed a 20-year friendship pact with USSR and it helped immensely. Muscle flexing by the US under President Richard Nixon, and abetted by Henry Kissinger, who sided with Pakistan, came to a naught, due mainly to this pact.

How strong are democracy’s roots in Pakistan becomes clear when we look back and find that it could not handle the first free and fair December 1970 elections. The natural consequence of that election after the victory of Sheikh Mujib Rehman was that he should have become the PM of Pakistan. Since Mujib was denied this honour unfairly, a year later after the elections, by December 16, 1971, a new nation of Bangladesh was born and it rose from the ashes of East Pakistan. Of course, India played a huge role, cornered as it was hosting over 10 million refugees.