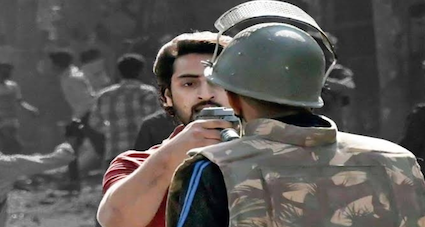 Shahrukh Pathan, the man who is accused of brandishing a gun at cops during the North-East Delhi 2020 riots, was welcomed back to a hero’s welcome when he was on four-hour parole on Thursday.

The Court had granted Pathan some parole to visit his family, and he was instead greeted by a large crowd who gave him a rousing and warm welcome.

Pathan was caught on camera brandishing a gun at the cops during the riots. He was later convicted for the same.

The visuals of him being welcomed back home with much fanfare have shocked the nation, with many condemning the welcome he was accorded.

As per reports, Shahrukh Pathan’s father is seriously ill and that led to the court granting him a four-hour parole. His father, aged 65 has been suffering from various ailments and has undergone surgery in March 2022.“In these circumstances, the court is inclined to take a humanitarian approach and thus, the present application is allowed on the following terms. Accordingly, custody parole is granted to the applicant/accused Shahrukh Pathan @ Khan for four hours for 23.05.2022, as per Rules for taking him to the residence and he shall be allowed to meet his parents at the said house,” the Court ordered.

Also, Pathan could be seen enjoying the attention in presence of the Delhi Police personnel who were busy controlling the gathering on May 26. Reportedly, the Delhi riots accused was granted custody parole in March as well for attending the surgery of his father.

Accused Shahrukh Pathan was arrested in the year 2020 on the charges of opening fire at the Delhi Police officials and inciting riots in the national capital during the Anti-Hindu riots.

He has been charged in two cases. He has been booked under rioting and relevant sections for allegedly pointing a gun at head constable Deepak Dahiya during the riots on February 24, 2020. His name is also included in a charge sheet in connection with the Maujpur incident on February 24, where violence erupted between pro-CAA and anti-CAA groups and later spread to other parts of Northeast Delhi.

Two policemen named Raman and Deepak and a passerby Rohit Shukla had sustained injuries because of the violence that had broken out at Maujpur Chowk on February 24. Shukla had then confirmed that there were two groups of people, one of which was shouting ‘Allah­hu­Akbar’ and protesting against CAA and NRC.

The Delhi Court had later ordered an FIR against Pathan and booked him under Sections 147 (rioting), 148 (rioting armed with a weapon), 149 (unlawful assembly), 186 (obstructing public servant in discharge of public functions), 188 (disobedience to order duly promulgated by public servant), 153A (promoting enmity between different groups on grounds of religion, etc.), 283 (danger or obstruction in public way or line of navigation), 353 (assault or criminal force to deter public servant from discharge of his duty), 332 (Voluntarily causing hurt to deter public servant from his duty), 323 (voluntarily causing hurt), 307 (murder attempt), 505, 120B and 34 of the Indian Penal Code along with Section 27 of the Arms Act.