The one who predicted Kohli’s score, his dismissal and reaction before it all happened! 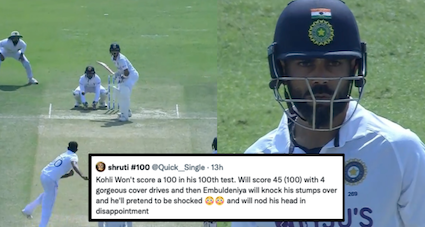 Kohli Won’t score a 100 in his 100th test. Will score 45 (100) with 4 gorgeous cover drives and then Embuldeniya will knock his stumps over and he’ll pretend to be shocked 😳😳 and will nod his head in disappointment.

This was a tweet much before former Indian captain Virat Kohli was dismissed on the predicted score, by the bowler mentioned as well as the number of cover drives he made.

Dinesh Karthik too couldn’t believe what he just saw happen.

Kohli looked solid during his time in the middle as he hit five boundaries during his knock. Kohli and Hanuma Vihari added 90 runs off 155 balls for the third wicket before Kohli was bowled by Lankan left-arm spinner Lasith Embuldeniya.

India finished the day on 357 for 6 with Rishabh Pant having missed his hundred narrowly by four runs in an entertaining knock.