The Pakistani lady, with military connections, who is Amarinder Singh’s muse 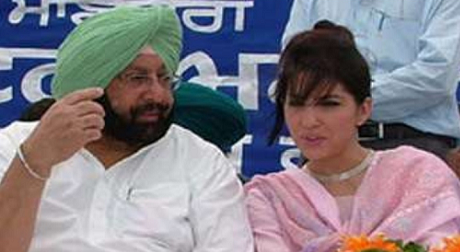 Over 16 years ago, in October 2004, a delegation of Pakistan media led by Imtiaz Alam, secretary general of Pakistan chapter of South Asia Free Media Association (SAFMA) visited Jammu and Kashmir. The delegation entered India via Wagah-Attari check post and reached Jammu almost at midnight. The journey from Amritsar to Jammu usually takes four hours, or a bit more, by personal vehicles, be it cars, jeeps or air-conditioned buses.

It was every bit an unusual visit for the bonhomie that India and Pakistan showed, allowing Pakistan journalists to visit J&K. Of course, it had been cleared at the highest level in both the countries. An Indian delegation comprising journalists from Delhi, and many from J&K, were scheduled to pay a return visit. Yours truly was a part of that visit in which Dileep Padgaonkar, Vinod Sharma, Tarun Vijay and late Shujaat Bukhari were fellow delegates. Nidhi Razdan, then of NDTV, was there, as was her father MK Razdan, representing Press Trust of India.

Back to the Pakistani delegation that crossed over and its composition. Led by Alam, other prominent members were Mustansar Javed, Nusrat Javed, Naseer Beg Chugtai, Tariq Maqbool, and the women journalists in the delegation were fiesty Mariana Babar, a very young Munize Jehangir (daughter of human rights activist Asma Jehangir), Rehana Hakim and Aroosa Alam. The last named was a jovial member of the delegation when it crossed Wagah, but she was not there in Jammu. Neither did one read her bylines in any newspapers, Indian, Pakistani or of a third country.

Throughout that trip, Munize was the most visible female journalist of the Pakistani delegation, mainly because she carried a video camera and a tripod all the time. She was shooting, along with other camerapersons, and also did her own PTCs (piece to cameras). Mariana remained busy taking keen interest in what was happening around, almost always, on the lookout for news, be it at the house of Muzaffar Shah in a lane near Broadway Hotel in Srinagar. Or while climbing stairs to Yaseen Malik’s third floor room in Maisuma locality, with walls full of horrible pictures of dismembered faces, bodies and houses.

Some sharp exchanges between the Pakistani delegation and some supporters of Yaseen Malik led to an unpleasant situation being avoided only because of deft handling by the delegates leader Alam. The delegates were served dinner but hardly anyone of them ate, and the Broadway Hotel tandooria had to be alerted for staying there overnight to cater to the Pakistani guests. The owner Krishnan Kumar Amla, and his son Arjun, had to be personally called up to make additional arrangements.

After spending some days in Jammu, the delegation proceeded to Srinagar, and from there it flew to Delhi by a Sahara Airlines flight, an airline defunct now for years. If Aroosa joined the delegation at some of the public interactions and photo ops, at Samrat Hotel, one doesn’t remember her as a journalist pursuing a story, or multiple stories. As already mentioned, the Pakistani delegation was led by Imtiaz Alam, an excellent sharp witted journalist, with a bald pate. The impression that many gathered was somehow Aroosa Alam was related to Imtiaz, since both had same surname!

That was factually wrong as Imtiyaz was a Lahoria, and the two were easily poles apart in their pursuits. If Imtiaz was a hardcore journalist breathing in and breathing out news, the only thing that one never saw Aroosa being bothered about was a story! She was a charming member of the Pakistani delegation, a stunner in her looks and elan, carrying herself with dignity, and an ever smiling face. She held her own effortlessly gliding among rich and the powerful, and in the company of likes of Sherry Rehman.

When the Indian delegation visited Pakistan later, Aroosa was all over the place, flitting from one top journalist, or a politician, to another. She glided through Awari Hotel in Lahore and was always given the most prominent place standing next to Pervez Musharraf, or some other top dignitary.

So much has happened in the intervening years between the two neighbours, so much to take bitterness to new highs. All journalists from either side, who filed mushy stories about the benefits of friendship both could reap, have fallen by the wayside.

The only one who maintains her ties on the Indian side is Aroosa who is billed as muse of Punjab Chief Minister Captain Amarinder Singh. All these years, she had weightier pursuits than any mundane news stories, busy as she was with Singh, campaigning for him or being by his side. Captain’s wife, Parneet Kaur, is resigned to this dalliance as apparently she has not made a show of it till date publicly.

The long tradition of the ancestors of the redoubtable Captain, the Maharajas of Patiala of yore, of having more than one queen, appears to have been kept alive. The mother of Aroosa, a woman like very few others, was known as General Rani, being the unofficial consort of General Yahya Khan, in Pakistan once upon a time. Aroosa too is considered close to Pakistan’s military establishment and somehow, its implications in Indian context, are ignored by Indian media.

There is nothing official about Aroosa and Captain either. Nor the role this Pakistani could’ve played or not played in Punjab’s politics.

(NewsBred coaxed writer Sant Kumar Sharma to pen his remembrances after it read an old piece in The Quint, the takeaways from it were thus:

“She (Aroosa’s mother) was considered the most powerful woman in Pakistan between 1969 till 1971, being described by the Pakistani media as the “muse and mistress” of Yahya Khan,

“She was married to a policeman, had six children, and one fine day – as the story goes – just decided to walk out on him when he insisted she wear her burqa properly…She began visiting nightclubs, started arranging dance parties for men bored with their wives, with the powerful army gentry forming a substantial percentage of her clientele.

“Somewhere along the way, Yahya Khan – very fond of his booze – fell in love with her and to cut a long story short, he rose to be the dictator of Pakistan and Alam his mentor, muse, and companion.

“Aroosa Alam too was married, shed this burden, has two sons and a husband no one now really remembers. In Pakistan, many scribes saw her as very close to the military establishment, with different rumours making different aspersions.

“Amarinder Singh met her during one of his visits, and somewhere as they say history repeated itself. He was at the time married, without any real controversy, to Preneet Kaur who went on to become the Minister of state for External Affairs in the Congress Manmohan Singh government.

“By this time, her husband’s affair with Aroosa Alam was an open secret, with neither of the two denying the rumours beyond a point. Alam has been fairly forthright throughout the relationship, refusing to hide it after the initial awkwardness. The wife obviously was very upset and eventually agreed that while Alam could visit, she would not get a visa for Punjab.

“Singh and Alam have over the past ten years become a fixture in Chandigarh, and now in Punjab… she is often seen in the charmed Chandigarh elite circles speaking of her love for yoga and of course for Singh.

“The relationship that many Singh supporters had given a “few days” at the onset, has not just lasted over a decade but is now at the point where Aroosa Alam is playing the first lady of Punjab. She is by Amarinder Singh’s side, as indeed her mother was by Yahya Khan’s at a time when Pakistan was even more conservative, braving the criticism and the charge of being from the Pakistani military establishment. The muse and the mentor of an Indian leader in the 21st century.

“In an environment where every Pakistani is facing the heat of bad relations with India in getting visas etc, there seems to be no such restrictions on Alam, who is almost a permanent resident here. She visits Pakistan regularly, but is now the first lady of the chief minister of an Indian state.” – NewsBred).