There would be more Tikait in your newspapers; but you could ignore him 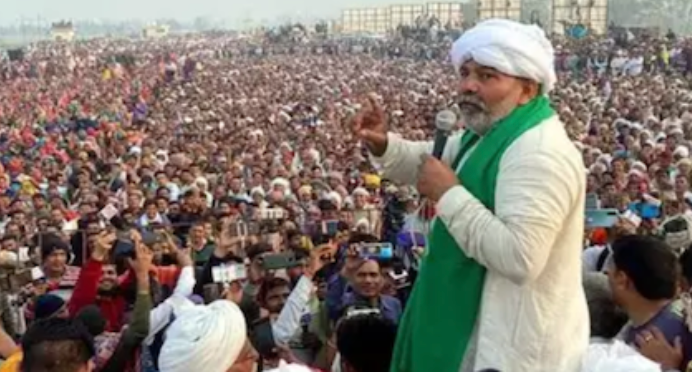 Muzaffarnagar Mahapanchayat and Rakesh Tikait got a full play in our newspapers today. It would have a similar echo on September 27 when they have called for Bharat Bandh. The pace would only quicken around the time of UP polls in February next year.

What was this Mahapanchayat for? Tikait says for dumping of the three farm laws which incidentally are in abeyance. He says the Centre hasn’t held a parley with farmer leaders since January 22 though the 11 talks held thus far have yielded nothing—and the Centre hasn’t stopped inviting them.  Farmer leaders are vehement against the farm laws but they won’t tell what are the clauses which bother them. Tikait is asking for better returns for sugarcane farmers in Uttar Pradesh even though under the UP government, 84% of dues this year have already been paid; and sugar mills have the trump card of ethanol to play with.

Majority in this country would believe that farm protests are a sham and has political underpinnings. Keshav Maurya, the deputy chief minister of Uttar Pradesh, calls this new round of noise as manufactured by SP, BSP and Congress. When Tikait screams “Allahu Akbar” from the platform (see below), he lends credence to the counter-argument that this protest is sponsored by Pakistan’s ISI and Khalistanis with an aim to disrupt India.

Where is India in farmers’ protest when they block highways and stores for months. The latest news to filter is Walmart closing its 50,000 square feet shop in Bhatinda which catered to small traders and employed nearly a 1,000. The Adani logistical parks closed in Ludhiana and Ferozepur, and the resultant loss of hundreds of livelihoods, are not a matter of public discourse. Nor has it mattered that Reliance’s Jio has lost 20 lakh subscribers in Punjab or that for months at end people are inconvenienced, their business and shops unoperational as it was during the Shaheen Bagh. This protest has held country to ransom and law and order both have done little.

Tikait clearly has UP elections in sight. He has been moving from Pilibhit to Muzaffarnagar. He is being personal and provocative on Yogi Adityanath. It would serve him if Yogi cracks the whip which the latter, wisely, is desisting from for the moment. In Pilibhit, Tikait was guest at ex-Samajwadi Party district chief Lakhvinder Singh Lakha. He says like he did in Bengal, he would do likewise in UP.

So brace yourself for more of this nonsense and Bharat Bandh in coming weeks and months. These farmers would gather in their fleets of luxury cars, hold up highways and toll plazas, news of assaults and rape could emerge, sneaky pictures of their luxurious tents might make appearances but nobody would question them.

Nothing would serve these protestors better than to evoke sympathy for farmers in India and abroad and images of a lathi charge would be a godsend for them. That’s what this game is all about. It would fuel their agenda and even draw the neutrals into the fold. This alone could pin the Modi government in a corner.  And this alone the Modi government doesn’t want to happen. As for why our honourable judiciary is silent, some other day.