These are criminals not agitators, says wife of man burnt alive at Tikri border 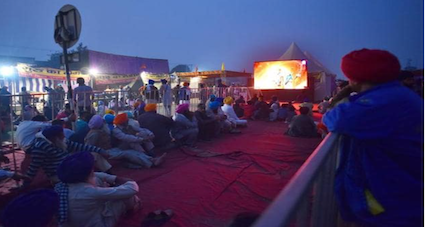 A man named Mukesh (42), a resident of Kasar village in Bahadurgarh of Jhajjar district of Haryana had succumbed to burn injuries after farmer protestors allegedly set him ablaze at the Tikri border protest site on May 16.

The investigation into this inhumane incident has revealed so far that the protestors, under the influence of alcohol, got into a dispute with the deceased. In that inebriated state, the accused hurled casteist slurs at Mukesh thereafter he was burnt him alive. Mukesh said so much during his treatment at the hospital.

The Haryana Police has registered the main accused Krishna. They have registered a case against culprits based on the statement of the deceased person’s brother. The case has been registered under IPC sections – 302 (murder), said the police officials.

The horrifying incident has left Mukesh’s family and the villagers in a state of disbelief and shock. When OpIndia reached this village on Friday (18 June 2021), a blanket of eerie silence swept the place. While speaking to OpIndia, Mukesh’s inconsolable widow Renu showed concern  about her and her 10-year-old son’s future. “What will happen to us?” repeatedly inquired the despondent widow of Mukesh.

The villagers who had earlier asserted that the farmer protestors had hatched a conspiracy to make Mukesh appear a ‘martyr’, to defame the government and its farm laws, have submitted a memorandum to the state administration, giving an ultimatum of seven days. They have also demanded financial compensation for Mukesh’s bereaved family.

Reminiscing the horrifying incident which has left Mukesh’s family devastated, his widow Renu said she was informed about the terribleincident by her brother-in-law. Renu rued that when her husband had left the house on Wednesday evening at around 5 pm, he was perfectly fine and in high spirits. Assuring to be back soon, Mukesh had asked Renu to keep the food ready. Renu had urged him to take his mobile phone along with him, but he refused, saying he is going to be back soon.

Renu lashed out claiming that the people who have hijacked the border areas in the name of protesting against the farm laws are not farmers but hardcore criminals. “They are perpetually drunk and always under the influence of alcohol. It’s been a year, these people are not going from here. They have created chaos over here”, said Renu, wondering if they were actual farmers fighting for their rights would they be perpetually drinking and creating a ruckus as they have been for the past year?

Likewise, Tony Kumar, the Sarpanch of the village also cast doubts upon the intent of these people, who have been protesting as farmers.

Expressing his trepidation after the ghastly incident, Tony Kumar said that in the past, many villagers have come to him with complaints against these protesting people. Villagers complain that these farmers go to their fields to defecate, they molest and harass the women of the village.

In fact, in the complaint submitted to the police, a copy of which is with OpIndia, the villagers have mentioned the constant harassment they have been facing in the hands of these so-called farmers for months now. “For the last 6-7 months, the alleged farmers have created a ruckus on the road adjoining village Kasar. They come to the village riding on tractors and make a fuss after drinking alcohol. They molest and harass our women. They should be removed from the periphery of village Kasar with immediate effect”, read the complaint.

Meanwhile, Mukesh’s grief-stricken mother Shakuntala, whose whole world came crashing down around her when her son was merciless set ablaze,  also remembered how her son had told her and his wife Renu to prepare food.

Accusing the hoodlums, pretending to be fighting for the rights of farmers, of burning her innocent son, Shakuntala named Krishna as one of the main culprits. She lamented how her son left the house on Wednesday evening for a walk to the nearby field never to return back.

Following the incident, Tony Kumar, the village Sarpanch said that he does not want any farmer leader to come to their village. “These are butchers, not farmers. The administration is fully cooperating with us. We have given a week’s time for the removal of the tents put up by the farmers. If they are not removed in a week, we will take law into our own hands,” Kumar said.

When inquired about how the Kasar village is supporting the alleged farmers’ agitation, Tony responded that they fulfil the responsibility entrusted to them by the village khap. The main task, he says, is to collect donations from the village and give it to the ‘agitators’. Mukesh’s brother Sanjeet admitted to pooling money in the village for the ‘protesters’. However, the people in the village have refused to actively participate in the protests.

As per Tony, despite provocative statements made by Rakesh Tikait, the villagers have donated to the cause of the farmers. He says, “We don’t want to spoil the atmosphere. We want to maintain brotherhood. But they are trying to vitiate the atmosphere. Complaints of agitators harassing the people after getting drunk in the evening have become fairly common here.”

When it asked him why he believes that Mukesh was attacked because of his caste, the sarpanch said that he has a video of Krishna admitting that Mukesh was targeted because he was a Brahmin. Kumar also claims that BKU leader Rakesh Tikait is the mastermind of the entire conspiracy.

Kumar cites Tikait’s anti-Brahmin remarks he had made in December 2020. “When their leaders spew venom, those below them are expected to do the same thing. I strongly suspect a conspiracy behind the death of Mukesh, orchestrated by the protesters to defame the government,” Tony said.

Meanwhile Mukesh’s brother Manjeet claimed that the Jind protesters are creating the most amount of ruckus. Interestingly, Krishna, the main accused in this case, is also from Jind.

When OpIndia tried to talk to grieving father, Jagdish Chandra, regarding the unfortunate incident, he refused to face the camera. Weeping bitterly, he painfully wondered about the future of Mukesh’s family. Mukesh is survived by his wife Renu and 9-year-old son Rahul. Mukesh was the eldest of three brothers.

Jagdish Chandra is not as fortunate as the ones who are sitting on protests around the Delhi borders. His family does not have a piece of land to be put to use for agriculture. Chandra’s sons did odd works to feed their family. Mukesh worked as a driver. Because of the lockdown, Mukesh was idle and had no work. Thinking about his son who was burnt alive, Chandra says, “All I want is that those guilty should be punished and the government should take care of Mukesh’s family.”

(This piece with certain modifications is taken from OpIndia with gratitude).