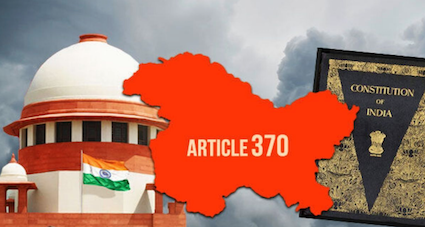 There are sharp political divisions in Union Territory (UT) of Jammu and Kashmir. There are politicians who swear by Article 370 and say that they will do all to get it restored. Then there are other politicians, mainly of the BJP, who worked assiduously for getting Article 35-A kicked out from the Constitution of India. Once 35-A was scrapped, Article 370 lost its soul.

In fact, not only its soul but its life force. Article 370 stays in the Indian Constitution but it is in a comatose position. In a coma, the patient is kept alive by the insertions of a lot of tubes, here, there and everywhere. For air, for feed, for medication, and other things besides, there are tubes. Each meant for a specific purpose, for putting things in and for taking things out.

Article 370 is not alive though technically it can be said that it has not died. Long live 370 then!

Three years ago, on August 5, 2019, Union Home Minister Amit Shah moved a Bill in the Rajya Sabha to remove Article 35-A. There is an evergreen anecdotal story about a dreaded rakshasa (demon), a tota (parrot) and poor villagers.

The hero of our story got hold of the tota and broke one of its legs. Behold, and by some magic, the rakshasa also lost a leg and was writhing in pain on ground. The villager then broke a wing of the tota next and an arm of the rakshasa got broken. Emboldened, the villager broke the tota’s neck and the rakshasa died.

Something like that happened with Article 370 too as 35-A was abolished. It is there now, but lifeless, impotent and with a good for nothing statute.

Long ago, it was on June 23, 1953, that Shyama Prasad Mukherjee was martyred in a Srinagar (Kashmir) hospital as he had been kept in custody by Sheikh Abdullah’s government for 44 days by then. Mukherjee, heading Bharatiya Jan Sangh (BJS) at that time, the forerunner of the Bharatiya Janata Party founded in 1980, had been arrested on May 11, 1953, from Lakhanpur the moment he crossed into territory of Jammu and Kashmir.

He was agitating in support of Praja Parishad which opposed Article 370, and all that it implied. It was nothing short of Mukherjee’s dream coming true on August 5, 2019. The fulfillment of Pandit Prem Nath Dogra’s vision, the foremost Praja Parishad leader.

At this juncture, the leaders from Kashmir are free to follow their path and try to gather support for restoration of Article 370. But restoration seems almost impossible to achieve, just as its removal seemed like a dream at one time.

Be it Farooq Abdullah, Omar Abdullah, Mehbooba Mufti and Yusuf Tarigami, or some others, they can reiterate they will not give up their struggle for 370. This struggles, it seems, is unlikely to be fulfilled in a hurry.

The political posturing adopted by the Congress, or Altaf Bukhari is more nuanced. They mostly sidestep the issue of 370 and talk about everything else under the sun in their speeches. In Kashmir, it helps gain sympathy of the masses if a hysteria is whipped up in favour of 370.

Before the ordinary masses, these leaders can claim that they have pinned their hopes on the Supreme Court. As if the court is inclined to and has indicated that it will restore 370. Even the date of hearing has not been decided. Leave that aside, for hearing a case of this nature, a Constitution Bench will need to be set up. That too has not been done.

In August 2014, a writ petition was filed in the Supreme Court challenging the constitutional validity of 370. Over the years, some more petitions were filed in the same vein, each focussed in a different way on alleged violations of the Indian Constitution.

Some hearings were held by the apex court but whenever a hearing was scheduled, a call was given for `Kashmir Bandh’ or `Hartal’. To mount pressure on the court to not give what Kashmiris considered an adverse verdict. Hearings were not allowed to proceed and the judges were prevented from framing questions, considering them legally and then giving verdict.

If and when the Supreme Court decides to hold hearings filed for restoration of 370, these petitions should also be clubbed in the same case. The logic of this argument being the fact that one set of petitions is against 370 and others in its support. The apex court should hear both those who support and those who oppose it and then only pronounce judgment.

A lot has changed in J&K during the past three years, beginning with two Union Territories coming into being, with Ladakh being made a separate UT. Ladakh now has two universities, and it did not even have one earlier. Similarly, it will also have its own medical college in the government sector.

Overall, there hardly seems to be any reason Ladakhis would want to be part of J&K as earlier. For most of them, it has been good riddance from perpetual Kashmiri hegemony. People of Jammu too are unlikely to ask for bringing back days of pre-370 era ever.

In fact, there is a section of people in Jammu who want to be separated from Kashmir altogether. These sentiments are being articulated by Dogra Swabhiman Sangthan (DSS) of former MP Lal Singh and Ikkjutt Jammu headed by Ankur Sharma.

Sharma says that without separating Jammu from Kashmir, the action initiated on August 5, 2019, is incomplete. His stance for a separate Jammu state has now taken roots in many districts of the Jammu region. He has made no attempt ever to have any political support among Kashmiris.

Incidentally, who all have gained because of Article 35-A being scrapped?

1. Women of J&K are the first and most important beneficiaries. They have gained equal rights as their male counterparts had.

3. Gorkhas residing in the UT for several generations have gained.

4. Valmikis, unfortunate victims of Article 35-A, have gained.

5. Scheduled Tribes (STs) have gained as they get political reservation for the first time in J&K since Independence.

6. Panchayats have gained as have the urban local bodies. That means there has been an effective decentralisation of powers.

These are a few points that need to be made about a resurgent J&K.

It has been three glorious years without Article 35-A and a restated & neutered 370.