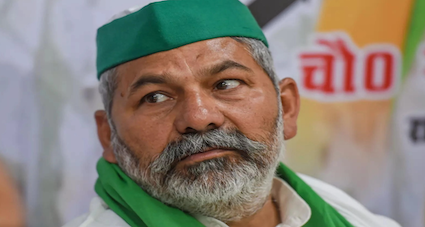 Speaking to reporters, Tikait also questioned why such incidents were only taking place in Opposition-ruled states and remarked that even if something ‘small’ happens, BJP rushes to claim Pakistan’s hand.

“This incident happened where the BJP government is not there. Be it Rajasthan or Punjab, these incidents will increase, see the history. It is the time of the BJP. Those in the Centre can do all this. Whenever something small (zara sa kuch) happens, they say Pakistan is involved. India has Constitution, Law, and Sections, what happened to Section 302? What will Pakistan do and what they will do in this? Those who have done this murder, book them under Section 302,” said Rakesh Tikait.

It is pertinent to mention here that the case has been taken over by the National Investigation Agency (NIA) after a Pakistan link emerged. Sources have claimed that the accused were influenced by Pakistan-based extremist outfit Dawat-e-Islami and had visited Karachi, not once, but twice. They remained in the Islamic nation for around 45 days before returning to India and committing the horrific murder.

However, NIA has denied any terror angle to the horrific incident.

A tailor, identified as Kanhaiya Lal, was murdered by two in Udaipur on June 28 over a social media post supporting suspended BJP spokesperson Nupur Sharma. The men, who allegedly carried out the murder in broad daylight, posted videos on social media admitting to the crime. In a clip, one of the accused admitted to the killing and then threatened Prime Minister Narendra Modi.

Even prior to the murder, the accused had issued an open threat to the tailor nearly 12 days ago, complaints about which were allegedly made to the police by the deceased. Yet no action was taken. Both accused- Rafiq Mohammed and Abdul Jabbar- have been arrested and the Rajasthan government has imposed section 144 of CrPC in all districts for the next month to prevent an escalation of communal tensions.

Meanwhile, Chief Minister Ashok Gehlot has appealed to the people to maintain peace and asked them not to circulate the gruesome video. “Both the accused of the murder of a youth in Udaipur have been arrested from Rajsamand. The investigation, in this case, will be done under the Case Officer Scheme, and by ensuring a speedy investigation, the criminals will be punished severely in court. I again appeal to all to maintain peace,” he said.