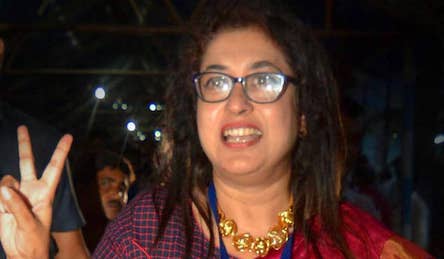 Trinamool Congress MP Shatabdi Roy has expressed unhappiness with the way she was being treated. This has led to speculation that she may be toying with the idea of quitting the party. “If I take a decision, then I will let you know at 2 pm on the 16th of January,” was a message on her fan page club social media account.

It was, however, not clear whether this was her official stance. She has represented Birbhum in the Lok Sabha from 2009 and was seen marching next to Chief Minister Mamata Banerjee on December 29 at Bolpur. However, after the post appeared in social media, her phone was out of reach constantly.

On Thursday, West Bengal BJP chief Dilip Ghosh claimed that 50 Trinamool MLAs would join his party next month. This was in response to a minister Jyotipriya Mallik saying six to seven BJP MPs would join Mamata Banerjee in May.

The post goes on to say that she is trying to take vital decisions right now. “The people of Bengal have loved me from much before I became a member of parliament. I will also continue to try and do my duty. If I take a decision, then I will let you know at 2 pm on the 16th of January,” she said.

Expressing surprise at her comments, Trinamool MP Saugata Roy said he will wait till Saturday to see what decision she takes. Incidentally, another Trinamool leader Rajib Banerjee has also announced on his social media page that he will hold a Facebook Live address on Saturday, 16th January at 3 pm.

According to some people in Birbhum district, Shatabi may be unhappy as Trinamool’s district leadership has undermined her position for some time. It seems ahead of the assembly elections in the state, more upheavals may occur in Trinamool Congress.