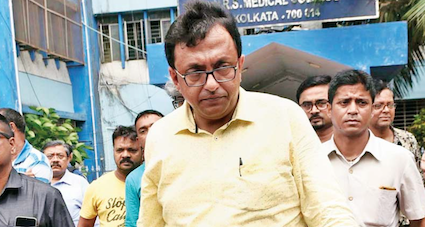 Trinamool Congress MP Santanu Sen was suspended for the remaining part of the monsoon session of Parliament on Friday.

Rajya Sabha Chairman Venkaiah Naidu declared his suspension within moments of V Muraleedharan, the Minister of State for Parliamentary Affairs, moving a motion on this.

“I move that Dr Santanu Sen, AITC, be suspended from the services of the House…for his unruly bhaviour, unbecoming of a member of Rajya Sabha, yesterday…” Muraleedharan said in his motion.

Naidu said that he was deeply distressed by the course of events in House yesterday. “Unfortunately, proceedings of the House hit a new low with papers being snatched from the Minister and torn into pieces. Such actions are a clear assault on our Parliamentary democracy,” he said.

Union IT minister Ashwini Vaishnaw, while responding to yesterday’s incident, said, “Trinamool Congress has a culture of violence in West Bengal. They want to bring the same culture in Parliament. What kind of message they want to give to next generation of Parliamentarians?”

On Thursday, Sen rushed into the Well of the Upper House, snatched the paper held by Vaishnaw and tore it up. Sen was among the several Opposition leaders who had entered the Well in protest against the alleged snooping controversy.

Meanwhile, With this, the Rajya Sabha failed to function for the fourth day in a row.