Trump launches his own communication platform; works around SM bans 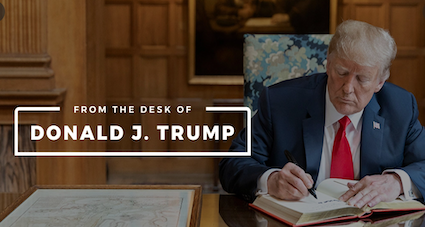 Former president of the United States Donald Trump has launched his own communication platform, nearly four months after he was removed permanently from Twitter, YouTube and Facebook.

Called “From the Desk of Donald Trump,” it’s a one-way communication platform. It would relay Trump’s messages which can further be shared on Twitter and Facebook.

Donald Trump and his wife Melania had earlier launched a website, named the Office of Donald Trump, early in March. The websites allows Trump’s supporters to request their participation in the events, submit letters and ask for personalised greetings.

In January, Washington DC had erupted in violence. Angry citizens had stormed Capitol Hill, angered by the results of the presidential polls which they believed was fraudulent. A woman had been shot dead.

Trump had then addressed his supporters and asked them to go home. However, he continued to maintain that the 2020 Presidential elections were “stolen”. It led to Twitter and Facebook removing him from their platforms, terming it as incitement to violence.