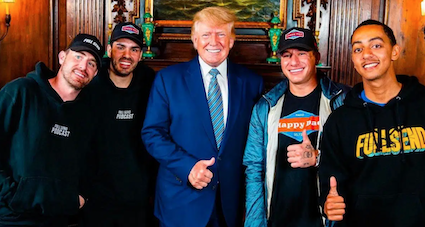 Donald Trump, former president of the United States, continues to be censored by social media giants.

On Thursday, YouTube deleted a video featuring Trump on NELK Boys podcast after the former mentioned voter fraud in 2020 elections.

During the episode, Trump talked about a variety of issues, including the ongoing Russia-Ukraine war and the energy crisis facing USA right now. However, it is his mention of the voter fraud in 2020 US Presidential elections that was classified as misinformation and used by YouTube to strike down the video. Ironically, Trump mentioned during the video that it is likely to be censored by YouTube.

Shortly after the removal of the video, Donald Trump was on Fox News talking about the whole episode and hence, a message that was intended to be suppressed ended up being a major news instead.

NELK is known for its pranks and lifestyle videos. It’s said video with Trump had garnered over 5 million views by the time it was removed by YOuTube.