Tussle over Shiv Sena: Shinde claims it belongs to his faction 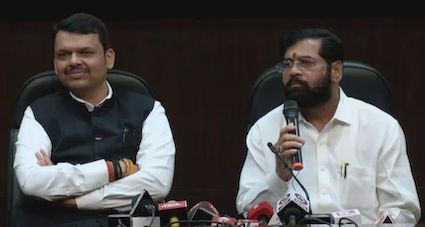 Maharashtra Chief Minister Eknath Shinde launched salvos at his predecessor Uddhav Thackeray on Saturday stating that his faction is the Shiv Sena which has been recognised by the Speaker of the state’s Legislative Assembly.

He also stated that the new government, which is very strong. will work for the people of the state.

“We are Shiv Sena as you know, the speaker of the Legislative Assembly has recognized us. Some people have moved court but we believe in the law system. We have the numbers,” Shinde said.

“The new government that has been established in Maharashtra is very strong. We have a majority. We have 164 MLAs, the opposition has 99. We will use this opportunity to benefit the people of Maharashtra,” he added.

Taking on Maha Vikas Aghadi (MVA), he added that the existence of Shiv Sena came under threat under the previous regime. “Back then, we couldn’t speak; that’s why we took the step. It’s only the natural alliance of BJP and Shiv Sena that can take Maharashtra ahead,” Shinde said during a joint briefing with Deputy Chief Minister Devendra Fadnavis.

CM Shinde further added that they did not discuss political matters but rather made a courtesy visit to leaders of the BJP. “Consultation for allocation of portfolios is ongoing,” he added.

The meetings followed lengthy deliberations over the power-sharing arrangement in Maharashtra between the Shinde-led Shiv Sena faction and BJP at the residence of Home Minister Amit Shah that began late Friday night and went on till the wee hours of Saturday.

Shinde and Fadnavis, who assumed office on last month after the then chief minister Uddhav Thackeray resigned in the face of a massive rebellion, are also scheduled to meet Prime Minister Narendra Modi on Saturday.