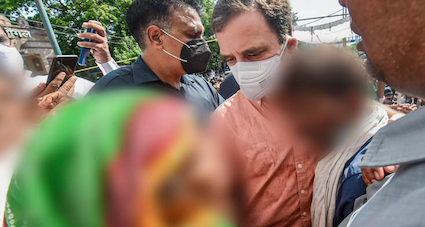 The National Commission for Protection of Child Rights (NCPCR) has issued a notice to Twitter India, asking them to take action against senior Congress leader Rahul Gandhi for revealing the identity of a minor who was raped and murdered in Delhi Nangal village under the POCSO act.

The notice came after Bharatiya Janata Party spokesperson Sambit Patra accused Gandhi of revealing the details of the minor victim and violating the POCSO Act.

Priyank Kanoongo, NCPCR chairman, took to Twitter, posted a copy of notice, and informed that the committee had got a complaint against Gandhi for tweeting a photo of a minor girl victim’s family.

Meanwhile, The four accused were booked under sections related to rape, murder and threats, and under the POCSO Act and the SC/ST Act provisions.