Twitter blocks no less than India’s IT minister Prasad; outrage on social media 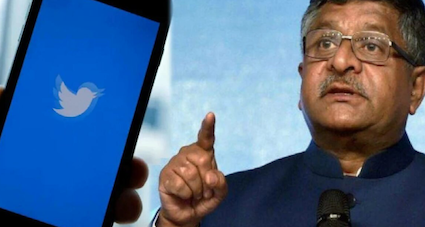 Twitter, on Friday, blocked Union Electronics and Information Technology and Communications Minister Ravi Shankar Prasad access to his account on the micro-blogging site for an hour for allegedly violating the copyright act of the United States of America.

After getting access to his Twitter account, Ravi Shankar Prasad said Twitter’s actions were in gross violation of Rule 4(8) of the Information Technology (Intermediary Guidelines and Digital Media Ethics Code) Rules 2021 “where they failed to provide me any prior notice before denying me access to my own account.”

“It is apparent that my statements calling out the high-handedness and arbitrary actions of Twitter, particularly sharing the clips of my interviews to TV channels and its powerful impact, have clearly ruffled its feathers.Further, it is now apparent as to why Twitter is refusing to comply with the Intermediary Guidelines because if Twitter does comply, it would be unable to arbitrarily deny access to an individual’s account which does not suit their agenda,” he said in subsequent tweets.

Ravi Shankar Prasad shared the incident through Indian microblogging platform Koo and wrote, “Friends! Something highly peculiar happened today. Twitter denied access to my account for almost an hour on the alleged ground that there was a violation of the Digital Millennium Copyright Act of the USA and subsequently they allowed me to access the account.”

Friends! Something highly peculiar happened today. Twitter denied access to my account for almost an hour on the alleged ground that there was a violation of the Digital Millennium Copyright Act of the USA and subsequently they allowed me to access the account. pic.twitter.com/WspPmor9Su

Since the new IT Rules have come into effect, Prasad has given interviews to various TV channels explaining the new rules. He has also criticised Twitter for not complying with the new Rules in these interviews.

However, it can be clearly seen that Twitter was not very comfortable with the posts criticising Twitter for non-compliance with the IT Rules and hence it threatened the IT Minister by denying access to his account for about an hour for alleged violation of copyright law of the USA.

But, despite Twitter locking his account, Ravi Shankar Prasad asserted that “no matter what any platform does, they will have to abide by the new IT Rules fully and there shall be no compromise on that.”