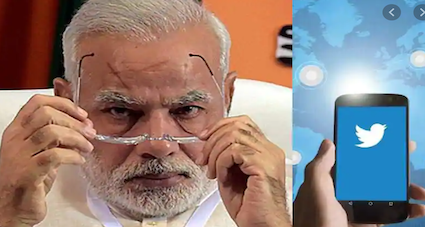 If the new media laws by the Indian government are taken in letter, if not in spirit, Twitter could lose its status in the next 48 hours.

While notifying the new laws on all media, including Social Media giants, the Modi government on February 25 had asked everyone to ensure compliance with the new rules within three months and fall in line.

The Centre, it is learnt, had warned the Social Media giants that failure to comply with the rules could make them lose their status of “intermediary” and may open them to criminal action.

It’s important NewsBred shares the stand-off between Twitter and Modi government and its background.

After a few BJP faces, including spokesperson Sambit Patra, had tweeted about the “Congress toolkit” to hurt Modi government on Covid-19 second wave, Twitter had termed them as “manipulated media” even after the Centre had asked them to take down the tag. Meanwhile Delhi Police, which is investigating the case, has asked Twitter to furnish the evidence which has made them dub the tweets by BJP leaders as “manipulated media.”

The new Intermediary Guidelines and Digital Media Ethics Code Rules makes it obligatory for Social Media giants to only be a “facilitator” between an individual and the community of twitter. The moment it acts as a “censoring” entity, it becomes a “media outlet” and no longer an “intermediary.”

The compliance order by the Ministry of Electronics and IT also requires all Social Media giants to appoint a chief compliance officer, a nodal contact person, besides a resident grievance office, each of whom ought to be employees residing in India.

As per Republicworld, but for Koo, an Indian social media company, no other significant outlet has made any of these appointments.

It’s also learnt that so far social media platforms have either sought more time or claimed they are awaiting instructions from their company headquartered in the United States.

However, the Centre views that three-months time is enough for the Social Media giants to fall in line.

The basic premise of the logic is: Who do aggrieved party against the Social Media giants approach in the absence of such appointments?

Besides, the “fact-checkers” with these media companies are opaque and not transparent. One doesn’t know if they are individuals or outsourced to some investigative digital outlets.

The notification by the Centre lays down the following compliance orders for Social Media giants.

1. Officers and contact address in India: All significant social media intermediaries are required to appoint: (a) a Chief Compliance Officer; (b) a Nodal Contact Person; and (c) a Resident Grievance Officer, each of whom are to be employees residing in India. The Rules also necessitate significant social media intermediaries to have a physical contact address in India published on its website or mobile application or both.

2. Grievance redressal: Under the Rules, intermediaries must prominently publish on website, mobile application or both- (a) the name and contact details of grievance officer and (b) the complaint mechanism. The grievance officer must acknowledge the complaint within 24 hours and dispose it off within 15 days and provide reasons to the complainant for any action / inaction.

3. Active monitoring of harmful content: significant social media intermediaries shall endeavour to deploy technology-based measures, including automated tools to identify information that depicts rape, child sexual abuse or conduct, or information that has previously been removed. The Rules also require maintenance of appropriate human oversight, and periodic review of such automated tools.

4. Compliance report: Significant social media intermediaries must publish a monthly report containing details of- (a) the complaints received; (b) action taken; and (c) number of links/ information removed or to which access is disabled, pursuant to any proactive monitoring by using automated tools or any other relevant information as may be specified.

5. Removal of/disabling access to information: In case any objectionable information is removed by an intermediary on its own accord, following steps need to be taken – (a) ensure that prior to the removal/ disabling access, the user who created, shared, uploaded such content is notified of such removal/ disabled access along with reasons; (b) provide adequate and reasonable opportunity to the user to dispute the action and request for reinstatement of such access; and (c) resident grievance officer to maintain appropriate oversight over the dispute resolution mechanism.