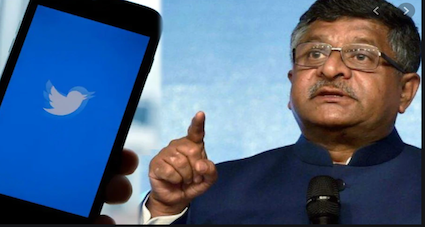 Twitter has lost its legal protection win India as it failed to comply with intermediary guidelines despite being given multiple opportunities, Union minister Ravi Shankar Prasad said on Wednesday.

Twitter was required to appoint key officers in India but it failed to comply with new IT rules and thus lost its legal immunity.

The microblogging platform was booked along with journalists and two Congress leaders in connect with an incident where a Muslim man was allegedly assaulted.

Prasad, confirming the development, said: “The simple fact of the matter is that Twitter has failed to comply with the intermediary guidelines that came into effect from the 26th of May.”

In a series of tweets, Prasad said Twitter was given multiple opportunities to comply with the new IT rules but it “deliberately chose the path of non-compliance”.

“The culture of India varies like its large geography. In certain scenarios, with the amplification of social media, even a small spark can cause a fire, especially with the menace of fake news. This was one of the objectives of bringing the Intermediary Guidelines. It is astounding that Twitter which portrays itself as the flag bearer of free speech, chooses the path of deliberate defiance when it comes to the Intermediary Guidelines,” the Union minister wrote.

Reiterating that the law is above all, the Union minister said, “Indian companies be it pharma, IT or others that go to do business in USA or in other foreign countries, voluntarily follow the local laws. Then why are platforms like Twitter showing reluctance in following Indian laws designed to give voice to the victims of abuse and misuse?”

The government gave one last chance to Twitter to comply with the new IT rules last week. The new law requires tech companies in India, including WhatsApp, Facebook, Google and others to appoint a chief compliance officer, nodal officer and grievance officer in the country.