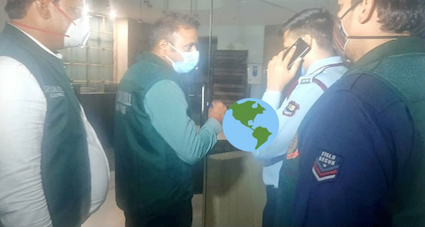 The police reported to have interrogated Maheshwari in Bengaluru on 31 May and questioned him how Twitter tagged the tweets of BJP spokesperson Sambit Patra as manipulated media.

The Special Cell had asked MD Manish Maheshwari to join the investigation in New Delhi, but when he told them that he was in Bengaluru, officials decided to join him.

However, according to sources, the police had found his replies on the rationale for flagging the toolkit as manipulated media “very ambiguous”.

The government sources informed that the investigation has established a clearer picture of Twitter India’s links with the US-based parent company and unearthed a “complex web of the corporate veil to mislead Indian law-enforcing entities”.

According to a report, Delhi Police has said that despite being the senior employee of Twitter India’s subsidiary Twitter Communications India Private Limited (TCIPL), Maheshwari isn’t aware of the company’s directors.

“Manipulation starts at the doorstep of Twitter itself. Twitter should start fact-checking its own employees. The senior-most employee of Twitter India has misrepresented people at large by announcing Maheshwari as Managing Director when he claims to be mere sales head when asked to take responsibility,” said a senior government source

When asked about whom he reports to, Maheshwari told the officials that he reports to a Singapore-based Yu Sasamoto, vice president of Twitter for Japan, South Korea, and Asia Pacific (JAPAC). However, he does not know in which office his “boss” is located.

Delhi Police team informed that Maheshwari had told them that “His boss [Sasamoto] is not an employee of TCIPL. He does not know the exact name of the legal entity in which his boss is employed his best guess was Twitter Asia-Pacific”.

Sources in the Delhi Police clarified, “Since Maheshwari accepted that he reports to an employee of Twitter Asia Pacific, his contention that he is not related to Twitter Inc is obviously not true.”

Maheshwari is also not sure about the owner of TCIPL. However, he said Winston Foo, an employee of Twitter Asia Pacific in Singapore, could be one of the directors of TCIPL.

He was also pulled by the special cell for referring to himself as the MD of Twitter India despite claiming that he isn’t a Twitter employee.  Responding to them, he said that his ‘market-facing designation among advertisers is that of Managing Director of Twitter India (TCIPL)as per common market practice in Indian business circles.

Officials also asked him whether TCIPL received a single complaint from the public regarding questionable content posted on Twitter, to which Maheshwari said “some employees may have received content-related complaints” and they might be directed to the website help.Twitter.com.

It is important to note that since the beginning of the investigation, Twitter India has been trying to establish that it has no links with Twitter Inc, claiming itself to be just a marketing office. But Delhi Police have found that among the 10,000 shares of Twitter India, 9,999 of them are owned by Twitter Inc.

The development has come to light a day after Twitter lost its status as an intermediary platform in India for not complying with new IT rules.