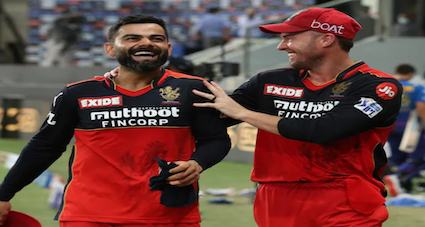 Virat Kohli’s nine-year stint as skipper of the Royal Challengers Bangalore ended with a four-wicket defeat to Kolkata Knight Riders in the eliminator of the 2021 Indian Premier League at Sharjah on Monday.

After the match, RCB took to Twitter to post a video, sharing dressing room scenes. In the video, AB de Villiers was heard poking fun at Virat Kohli after his final game as captain in the T20 league.

“I think some of the umpires will sleep a bit better. I am very happy for them,” de Villiers said.

Virat Kohli earlier revealed that he had discussed the idea of giving up captaincy in the Indian Premier League with his good friend and teammate, AB de Villiers, as early as 2019.

“About this decision, I had spoken to AB in 2019. It’s not new. With the IPL, I was always in a space where I wanted to create a peaceful environment.. We had this discussion and then I thought we will give it one more year. A restructuring of the management happened and things were much better in 2020. I felt a little more relaxed in that stage,” Virat Kohli said.