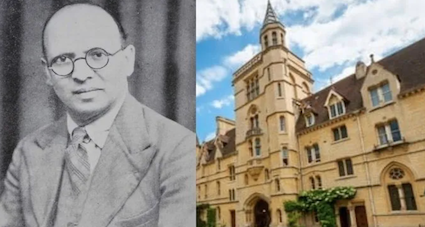 The Balliol College of the University of Oxford in England has named a building after Dr Lakshman Sarup, who was the first student at Oxford to submit his thesis for a Doctor of Philosophy (DPhil) degree in Sanskrit.

In a press release, Balliol College said, “Balliol’s newest buildings at the Master’s Field have been named after historic Balliol alumni and academics who reflect the diversity, values and history of the College. Block C1 has been named after Dr Lakshman Sarup (Balliol 1916).”

Highlighting Dr Sarup’s contributions, the statement read, “Dr Lakshman Sarup (1894–1946) was the first student at Oxford to submit for a DPhil degree, which he was awarded in 1919 on the subject of Yaksa’s Nirukta, the oldest Sanskrit treatise on etymology.”

Talking about his research thesis, the statement noted, “His DPhil was supervised by one of the foremost British scholars in the field, Arthur Macdonell, the Boden Professor of Sanskrit and a Fellow of Balliol. Sarup’s English translation of Nirukta was the first critical edition of the text, examining the contribution of ancient India and Greece to modern linguistics. He established that it was written sometime between 700 and 500 BCE.”

Dr Sarup being an expert in Sanskrit, went on to study and translate the critical edition of a treatise ‘Nirukta’ written by Sanskrit Grammarian Yaksa in the Rigvedic ages. Nirukta – which means ‘pronounced’ deals with etymology – the knowledge of ascertaining the meaning of words and also involves the study of roots with archaic meanings.

After Oxford University introduced the DPhil as the first doctorate degree in Britain in 1917, Sarup was one of two students who enrolled. Dr Sarup came to Oxford in 1916 as a recipient of the Indian State Scholarship and had previously obtained his MA in Sanskrit from Oriental College, Lahore.

He was appointed Professor of Sanskrit Literature at Punjab University in 1920. In 1942, he became the first Indian scholar to be appointed Principal of the Oriental College of the University of the Punjab.