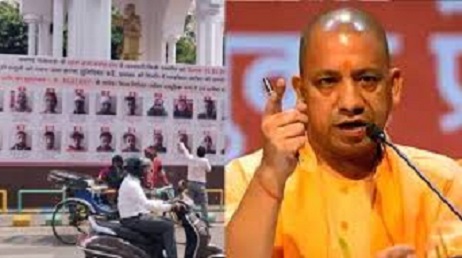 The Uttar Pradesh government on Thursday declared 14 anti-CAA protestors as absconders. Besides, it also announced cash rewards for those people who help in their arrest.

At least eight of these 14 protestors had been declared as “wanted” under the Gangster Act. This also marks the return of policy of naming and shaming those who were accused of wanton violence and damaging public property during the anti-CAA protests in December last year and at the beginning of this year.

Posters carrying photographs of 12 people accused of taking part in violent protests have sprung up in Lucknow’s Hazratganj area again. In March, the Allahabad High Court had directed the Lucknow adminstration to remove these posters. The Supreme Court had refused to stay the HC order saying there was no law which allowed this policy.

Later, a related law was enacted by the Yogi Adityanath government to cover this lacuna. Now, the return of naming and shaming policy is visible back through these posters.

The Citizenship Amendment Act (CAA) grants citizenship to non-Muslims from neighbouring Pakistan, Bangladesh and Afghanistan, if they have entered India before December 31, 2014. Hindus, Sikhs, Buddhists, Christians, Jain’s and Parsis from these countries are eligible for this scheme.

After the law was passed by Parliament, protests had started in many parts of the country. Some states ruled by the opposition parties had criticised this law and passed resolutions against it.

It needs to be recalled that clashes between those supporting the CAA and anti-CAA in Delhi had led to 53 deaths in last week of February. Violent protests were reported in some other parts of the country, including UP. The UP government had then cracked down against violence and started a policy of naming and shaming those identified as accused in the violence and damaging public property.