UP defence corridor takes shape: Aligarh is the first of six nodes 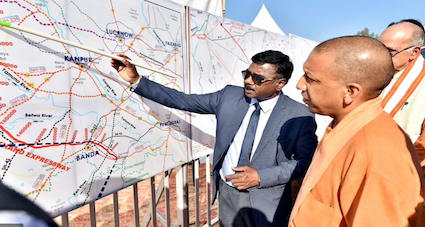 The state government-run nodal agency for the defense corridor project has also allotted more than 55.4 hectares of land to 19 defense manufacturing companies, which would be investing more than Rs 1,245 crores in the district.

The construction work of boundary walls, building a powerhouse, and a four-lane road is estimated at the cost of Rs 10.21 crore  and has kickstarted in Aligarh, confirmed Avneesh Awasthi, the Additional Chief Secretary Home and Chief Executive Officer of UPEIDA.

Defense corridors are being developed in Aligarh, Agra, Jhansi, Kanpur, Lucknow, Chitrakoot in UP.

Anchor Research Lab LLP has also been allotted 10 hectares of land in Aligarh. The company will be investing Rs 550 crore in the district.

Apart from UP, the central government had announced the second defense corridor in Tamil Nadu. It will extend from Chennai, Hosur, Coimbatore, Salem, and Tiruchirappalli.

The second defense industrial corridor was announced on the occasion of the Uttar Pradesh Investors Summit 2018. At the summit, PM Modi had said: “of one of the two defence industrial corridors mentioned in the budget, one is proposed in the Bundelkhand region of the state which will bring an investment of Rs. 20,000 crore and generate employment avenues for 2.5 lakh people.”

Now with this accomplishment, India can be seen inching closer to becoming self-reliant in the defense sector as well.