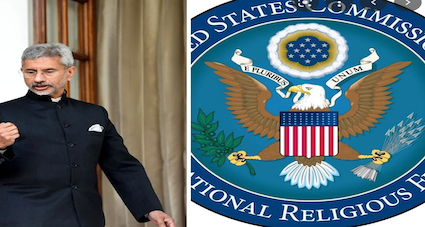 The Indian Ministry of External Affairs came down so hard on United States Commission on International Religious Freedom (USCIRF) that smoke must be coming out of ears these agenda-peddlers.

Terming it “biased” and “inaccurate, MEA dismissed their claims of India stifling voices of dissent, more so of minority community.

Responding to the controversial organisation’s 2022 annual report, MEA Spokesperson Arindam Bagchi said, “We have seen the biased and inaccurate comments on India by the US Commission on International Religious Freedom (USCIRF). These comments reflect a severe lack of understanding of India and its constitutional framework, its plurality, and its democratic ethos.”

He lambasted the organisation for continuing to disseminate misleading information and making false assertions about India in order to further its own selfish agenda. “Regrettably, USCIRF continues to misrepresent facts time and again in its statements and reports in pursuance of its motivated agenda. Such actions only serve to strengthen concerns about the credibility and objectivity of the organization,” said the MEA spokesperson.

The United States Commission on International Religious Freedom (USCIRF), an advisory body to the US Congress, on Saturday, released its 2022 annual report where it recommended that the US administration should classify India as a “country of particular concern”, along with other countries like Pakistan, North Korea, China and Saudi Arabia.

The contentious organisation asserted that in 2021, the Indian government stepped up the promotion and enforcement of policies, particularly those that advance a Hindu-nationalist agenda that adversely harmed Muslims, Christians, Sikhs, Dalits, and other religious minorities.

Moreover, the organisation took to its official Twitter handle to share a news report by Voice of America, the state-owned broadcaster, wherein the media organisation condemned the arrest of Teesta Satalvad and ex-IPS officer RB Sreekumar.

Meanwhile, sharing the report by the American mouthpiece VOA, USCIRF quoted its Commissioner David Curry as saying, “USCIRF is concerned about the Indian government’s continued repression of critical voices— especially religious minorities and those reporting on and advocating for them.”

In a subsequent Tweet, the controversial American organisation, which is in a habit of trying to meddle with India’s internal affairs and spreading canards against the Modi government, quoted USCIRF Commissioner Stephen Schneck as saying, “Human rights advocates, journalists, activists, and faith leaders in #India face harassment for speaking out and reporting religious freedom conditions. This is not reflective of a country with a history of democracy.”

The organisation recommended that the US administration should impose targeted sanctions on the Indian government responsible for ‘severe violations’ of religious freedom by freezing those individuals’ assets and barring their entry into the United States citing specific religious freedom violations.

Notably, USCIRF had made similar recommendations in its 2020 annual report. Then too, the Indian government had categorically rejected the claims made by USCIRF.

“We reject the observations on India in the USCIRF Annual Report. Its biased and tendentious comments against India are not new. But on this occasion, its misrepresentation has reached new levels. We regard it as an organisation of particular concern and will treat it accordingly,” Anurag Srivastava had said.

The controversial US body has always been at the forefront of the misinformation campaign against India. Ever since Narendra Modi returned to power in 2019, the USCIRF has been meddling in India’s internal affairs by indulging in one-sided motivated propaganda against the Modi government.

The US congressional body entered the scene following the abrogation of Article 370 in the country with its misleading statements and continued to do so even during the implementation of the historic Citizenship Amendment Act. They had also called India’s Citizenship Amendment Act to help persecuted minorities a ‘dangerous turn in the wrong direction.’

The Indian government has time and again rejected the one-sided prejudiced observations made by the US body. India had earlier said the American body on international religious freedom has chosen to be guided only by its biases on a matter on which it has no locus standi.

The USCIRF is the commission that had recommended the denial of a US visa to PM Modi when he was the CM of Gujarat. It had also threatened “sanctions” against Home Minister Amit Shah ‘if the Citizenship Amendment Bill was passed’.

The self-proclaimed religious freedom body USCIRF had indulged in a misinformation campaign by falsely claiming that coronavirus patients were being segregated on the basis of religious identity in an Ahmedabad hospital.

Citing a false propaganda report by Indian Express, the USCIRF had tweeted that it was “concerned with reports of Hindu and Muslim patients separated” into separate hospital wards in Gujarat.

However, responding to the misinformation campaign of the Indian Express, the Gujarat government had categorically denied the claims. The Health Department of Gujarat had also clarified that no segregation is being done in the Ahmedabad civil hospital on the basis of religion for coronavirus patients.