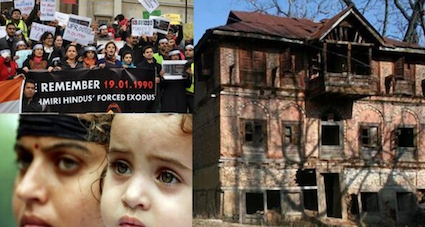 The world is slowly waking up to the plight of Kashmiri Hindus. The International Commission for Human Rights and Religious Freedom (ICHRRF) has officially recognized the Kashmiri Hindu genocide in Jammu and Kashmir.

The ICHRRF recognized the genocide of Kashmiri Hindus after holding a hearing on the matter.

This special public hearing on the topic of Kashmiri Hindus genocide (1989-1991) saw a number of victims and survivors of ethnic and cultural cleansing come forward and speak under oath, providing evidence.

The ICHRRF is a US-based non-profit body focussed on upholding Human Rights and Religious Freedom through continuous monitoring, policy intervention and collaboration.

“Thousands of homes and temples were destroyed. Over 400,000 Kashmiri Hindu men, women, and children were forced into exile by Islamic terrorists at gunpoint, ejected from their homes and everything they’ve known. Women were gang-raped, cut into two pieces with a saw and killed in the most brutal manner. Now, this culture is on the brink of extinction after self-advocacy over the course of 32 years, has been unsuccessful. Those who chose to remain in their homeland did so in faith believing in the goodness of their neighbours. The victims and survivors affirmed hope, peace, nonviolence, and safety, and found themselves raped, tortured, and executed by radical Islamic terrorists. Abused corpses were denied cultural funeral traditions and desecrated in psychological warfare to intimidate and control the remaining masses,” the press release said.

When politicians, neighbours, friends, students, and local police turned a blind eye and deaf ear, the ICHRRF noted that it was terribly painful. Despite this, the Kashmiri Hindus have no desire for violent retaliation or the propagation of anti-Muslim rhetoric, the group observed.

“Having lived peacefully for thousands of years as an indigenous religious minority, the cry for help from these Kashmiri Hindus fell on deaf ears globally. While it was expected to a degree that each nation and media outlet chooses what and how much they report pertaining to global events, it was excruciatingly painful when politicians, neighbours, friends, classmates, and local police turned blind-eyes and deaf ears. Feeling repeatedly ignored, dismissed, and invalidated, the world remained silent as victims were blamed instead of condemning those who committed barbaric crimes against humanity. Despite all of this, they neither want violent revenge nor to spread Anti-Muslim rhetoric. Rather, they respectfully request togetherness for the betterment of truth, justice and humanity, while they peacefully engage a spiritual, psychological, and emotional journey to heal intergenerational traumas and advocate to prevent future atrocities,” the press release further added.

The hearing concluded with ICHRRF urging the Government of India and the Government of the Union Territory of Jammu and Kashmir to identify and recognise the atrocities against Kashmiri Hindus in 1989-1991 as genocide.

“The Commission exhorts other human rights organizations, international bodies and governments to step up to the plate and officially acknowledge these atrocities as an act of genocide. The world must listen to these profoundly moving stories, seriously introspect on the impact of their past silence and inaction out of political expediency and make proper recognition,” the statement said.