US university closes down an institute funded by China 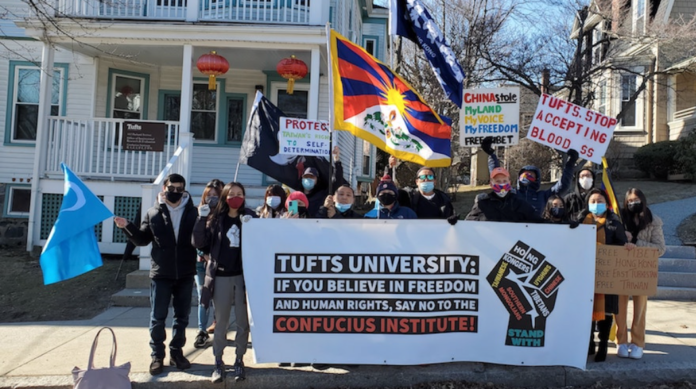 Massachusetts-based Tufts University announced that it will close its Confucius Institute, a controversial language and cultural education center funded by the Chinese government. The university’s contract with the controversial educational program expires in September and will not be renewed.

The Confucius Institute, launched at Tufts in 2015, is a nonprofit educational collaboration between Tufts and Beijing Normal University (BNU) that promotes Chinese language and cultural programming, and facilitates “educational and cultural exchange and cooperation,” according to the Tufts University website.

However, over the years, the ‘cultural centre’ has been accused of promoting censorship and undermining human rights.

The university’s decision has come after activists held their 13th weekly “Solidarity Saturday” protest outside the Tufts Confucius Institute and the home of Tufts President Anthony Monaco.

At Tufts, activists have staged a weekly protest outside the institute, attended by Tibetans, Uyghurs, Hong Kongers, Taiwanese, and others. It’s being organized by Students for a Free Tibet in Boston with support from the Tibetan Association of Boston.

Tenzin Yangzom, grass-roots coordinator for Students for a Free Tibet, called the closure a victory for all activists, students and their allies.

“We refused to accept that the Chinese government — the very regime that has driven us from homelands and is waging an unrelenting campaign of intimidation, persecution, and repression against our peoples — had a home at Tufts, and a presence in our own backyard,” Yangzom said in a statement.

Moulton called Tufts’s decision “overdue” but said it is a sign that higher education is “waking up to the threat the Chinese Communist Party poses to colleges and our country.”

A 2019 US Senate investigation found that the Chinese government provided about $158 million over 13 years to establish and run more than 100 institutes in the United States, including at K-12 schools.

Last year, U.S. Secretary of State Mike Pompeo also labeled the center that manages the Confucius Institutes in the United States “an entity advancing Beijing’s global propaganda and malign influence” and was hopeful that they would get them all closed out before the end of this year.

The Confucius Institutes now exist in 29 British universities and 150 colleges. While they declare to advertise Chinese tradition and language, the Mail reported that they curb free speech and peddle CCP propaganda.