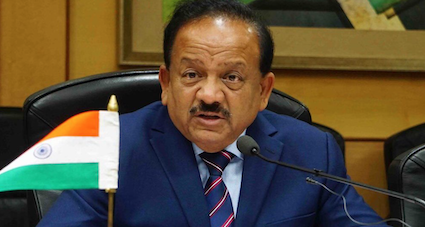 India has firmly opposed the adoption of COVID-19 vaccine passports at the G7 meeting of health ministers on Friday, saying that such an initiative could prove to be “hugely discriminatory”.

“Vaccine coverage as a percentage of population in developing countries is still low compared to developed countries, such an initiative could prove to be highly discriminatory,” Union health minister Dr Harsh Vardhan said during the G7 Plus ministerial session.

“At this stage of the pandemic, it is pertinent to also discuss India’s concern over the idea of a vaccine passport. Considering the fact of the lower levels of vaccination of the population in developing countries in contrast to the developed countries and given the still-unaddressed issues related to equitable and affordable access, supply and distribution of safe and effective vaccines, India would propose that the implementation of a vaccine passport will be hugely discriminatory and disadvantageous to the developing countries,” the health minister added further.

The health ministers of the seven most advanced economies of the world — the US, Canada, Japan, France, Germany, Italy and the UK were part of the G& summit with India being invited as the guest. While the pandemic remained the major apart from climate change, there were no discussions to speed up vaccine deliveries to less developed countries.

Amid the growing pressure on developed nations to share surplus vaccines with other nations, the G7 nations continue to be on their stance of sharing doses “as soon as possible”