Vadra dispenses with sanitizers and masks to poor with self-branding 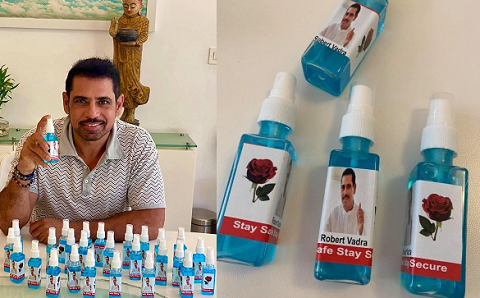 Robert Vadra distributed hand sanitizers and surgical masks among the poor people of Delhi, Gurgaon and Noida on the eve of Diwali. The sanitiser bottles carried his name and picture while the masks carried only his name. He shared some pictures with the purported beneficiaries on his Facebook account later.

Vadra said that as was the routine he followed in the past, this Diwali too, he was among poor and the needy. “With the corona virus catching speed all around, these children and elderly people on the streets need to be kept protected, too. Help out and educate them to mask up and keep hygiene, as much as they can,” he said.

According to the Facebook post, he distributed colourful masks and sanitizers among the poor people living on the streets, flyovers, temples and hospitals. It seemed a bit like self-promotion though because of his name being embossed both on sanitiser bottles and the masks.

Incidentally, Vadra is presently under investigation for charges ranging from money laundering to illegal land deals. The Enforcement Directorate (ED) is conducting probe into payment of Rs 300 crore in a defence deal and another inquiry is about a payment of $10 million he received in a petroleum deal.