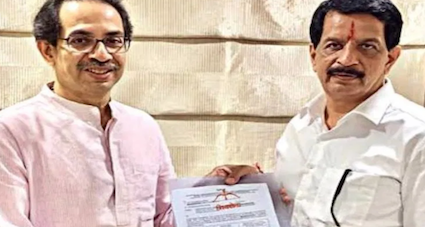 Suspended cop Sachin Vaze has reportedly confessed that another encounter specialist, and a Shiv Sena leader, Pradeep Sharma helped him procure the gelatine sticks which were planted in the SUV outside Reliance chairman Mukesh Ambani’s residence.

As per Republic TV, Vaze and Pradeep Sharma would be interrogated by NIA together face-to-face today.

Vaze has mentioned to the NIA that when he had called Mansukh Hiren to meet him, Pradeep Sharma was also present, the report states. And that one of Sharma’s aides had helped him secure gelatin sticks. Further, Vaze has told NIA that Sharma was using SIM cards acquired from Gujarat.

Pradeep Sharma, according to Republic TV, is believed to be mentor of Vaze and had gone to the police headquarters on march 2 to meet him.

On March 4, Pradeep and Vaze had met again, as per sources.

The NIA suspect that they met in western suburbs (Andheri-Marol-Chakala). There were other police officials who were also present during the meeting. NIA had taken Vaze to these areas for recreation of events on April 3.

Prdeep Sharma is one of five officers who were under NIA’s scanner. Sharma had also contested the 2019 assembly elections on a Shiv Sena ticket from the Nalasopara constituency.

Sharma was interrogated for eight hours on Wednesday, it was reported by Times Now. He was in service for 30 years before he quit the Mumbai Police in 2019 and joined the Shiv Sena. He had contested and lost in the 2019 Maharashtra assembly elections from the Nalasopara constituency.

Sharma was previously suspended from service owing to corruption allegations. He was reinstated back into service in 2017 after he was cleared of all charges. At the time of his elections, Sharma in his affidavit had declared his assets to be Rs 36.21 crore in his and his wife’s name.

Ex Mumbai Police Commissioner Param Bir Singh was also questioned by the NIA for around four hours on Wednesday.