VHP concerned at post-poll violence against Hindus in Bengal; appeal to judiciary 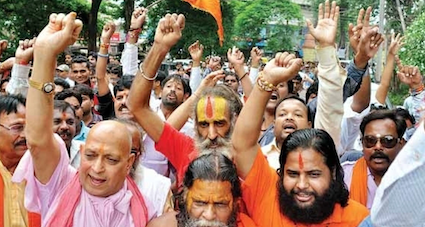 Vishwa Hindu Parishad (VHP) has expressed concern that almost 3,500 villages and over 40-thousand Hindus were badly affected due to post-poll violence in West Bengal by Trinamool Congress.

Taking to the Twitter, national spokesperson of VHP, Vinod Bansal, in a press release mentioned, “More than 3,500 villages and over 40-thousand Hindus, including our SC & ST brethren in great numbers, are badly affected by the violence. There have been brutal atrocities against women at many places. Standing crops have been destroyed. Shops and houses have been destroyed. The fish ponds of the pisciculturists have been poisoned,” he said.

In their press release, they pointed how TMC goons destroyed the house, shops, and other things belonging to Hindus. He also claimed that during the violence, brutal atrocities were committed on women in many places in Bengal in the press release.

VHP said that there is an atmosphere of fear in the society and it is unfortunate that Hindus are at the receiving end of the brutal and gruesome political violence.

The organization further informed that the important identity documents including ration cards, voter IDs, Aadhar cards have been snatched away from Hindus forcibly and should be “retrieved and returned to the victims” They also requested that the “false cases lodged against the victims of violence should be quashed.”

They have demanded immediate action from the state government and asked the judiciary to consider the situation and take strict action to ensure proper law and order in the state.

“The rioters must be arrested at the earliest and given exemplary punishment. At the same time, the state government should fast-track the mechanism to protect the Hindu society, compensate for the loss of life and property of the victims and rehabilitate them”, the statement read.

Apart from that, the VHP informed that they have been standing firmly with Hindus and are providing all the required help to the victims who are forced to live as a refugee in their state.

“We also ask the state government that rising above petty politics, it should curb, with an iron hand, the abominable atrocities being perpetrated by local criminals and Jihadi elements, take steps to protect Hindus, and make proper arrangements for rehabilitation of the victims. The Vishva Hindu Parishad stands firmly with the entire Hindu society in West Bengal,” the press release concluded.