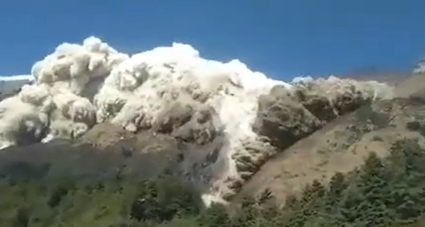 A massive avalanche in Nepal has gone viral on social media and the video is terrifying.

The video shows a storm of snow emerging in the country’s Mustang districts. In the background could be heard several shrieks. Some are seen running for cover as billows of white could be seen hurtling down.

11 people including seven students, were injured in the snow slide which continued for 30 minutes and rolled over a school, news agency ANI quoted an official as saying.

“People have been evacuated and moved onto safer grounds. The snow slide continued for 30 minutes. No human casualties have been reported so far. The majority of the injured are students of a local school,” Netra Prasad Sharma, the Chief District Officer of Mustang told ANI.

The avalanche erupted from Tukuche Mountain and blew downslope over Janadarsha Amarsingh High School while classes were underway, said the official.

Avalanches in the Himalaya are not uncommon but the one that occurred on Sunday is reportedly the biggest ever in the area.