Video emerges which suggests MoS is innocent in the tragic incident 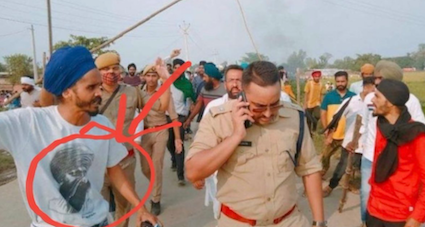 Nine unfortunate deaths have happened in Lakhimpur Kheri, Uttar Pradesh. Four of them are said to be farmers. Three have been identified as BJP workers, one a driver of the car and another a journalist.

Whodunnit? Farmers don’t deny the BJP workers and the car’s driver were beaten to death but claim it happened after the car had mowed down a few of them. The version of the other side, in which Minister of State Ajay Mishra “Teni” is in the line of fire, claim that it were bad elements among the farmers who had led a murderous attack on the car with stones and lathis. It led the vehicle to be upturned and crush a few of the farmers under its tumbling weight.

It appears both of them agree that the car belonged to Ajay Mishra. But the farmers’ claim that it was Mishra’s son Ashish in the car, in the centrepiece of unfortunate incident, doesn’t add up. It can’t be that a person is among many in the car who succumb to injuries and he doesn’t have even a scratch to show.

So, the car is in the centre of action, it belongs to an MoS’ son who was not in the moving vehicle. Now did the vehicle deliberately mow down the farmers? As luck would have it, there is a video on social media of a passenger of the car itself , blood streaming down his face, where he admits the car belonged to MoS but denies he was on a murderous mission.

The video is disturbing. It obviously is minutes before the man is allegedly killed. Blood is gushing from his forehead and he is heard saying he had not been instructed by the minister to do violence. There are voices around him who are desperately seeking a confession from the unfortunate man which could frame the MoS. The man is unequivocal in denying it: Listen to the relevant portion:

So somebody is seeking his confession. Someone is video-recording it too. The conversation conveys that the injured man is seeing his assaulters in the unidentified voices. There is obviously an attempt to frame the MoS in the entire incident. These voices don’t seem keen to arrange for medical assistance for a grievously injured person. We still don’t know if in failing to extract a “confession” from the injured did actually lead to further injuries, possibly fatal, inflicted on him.

Be that as it may, let’s now pay heed to what the farmers witness to the incident are demanding in the aftermath: (a) Register FIR; (b) Ex-gratia; (c) Government jobs to victims’ kin; and (d) judicial probe. There is no murder charge against the MoS for deliberately causing the “attack” on farmers.

But this obviously is not how the Opposition and Lutyens Media are portraying the incident. It’s a perfect moment for them, a few months’ before the UP assembly polls, to put the chief minister Yogi Adityanath on the dock. Samajwadi Party’s Akhilesh Yadav is on a dharna; Priyanka Gandhi has marched towards the venue and from chief ministers of West Bengal, Chhatisgarh and Jharkhand etc all are short on breath. Lutyens Media like NDTV are screaming with such headlines: “Four farmers were killed in UP violence over Minister’s visit”. Yogi Adityanath has been swift to put the region out of their bounds.

But the issue needs be read between the lines. It is in public domain that Babbar Khalsa International (BKI) operatives are active in the region. They have an extensive network in Western Uttar Pradesh. A Times of India report has stated in the past that the sympathizers of the dreaded outfit are active in Pilibhit, Shahajahanpur and Lakhimpur Kheri, the very last name which is the venue of this tragic incident. This region has several hamlets and tehsils dominated by the Sikh community.

(Babbar Khalsa International is a Sikh terrorist organization who want an independent Sikh nation, Khalistan. Its supporters operate in Canada, Germany and United Kingdom primarily, as well as in India. It employs armed attack to accomplish their goals, as per Wikipedia. It’s been banned as an international terror organisation by the United States, Canada, the United Kingdom, the European Union, Japan and India.)

The growing suspicion that Khalistanis have infiltrated the protesting farmers’ assemblage, as claimed by police and intelligence agencies from time to time, is lent credence by a picture which has emerged on social media (see above) where a “farmer” is walking alongside a police officer and wearing a T-shirt with the image of Jarnail Singh Bhindranwale, the secessionist who wanted an independent Khalistan in the 1980s.

But truth obviously have few takers. Darshal Pal, one of the protesting farmers’ leaders, has stated thus after the incident: “The farmers had planned to gherao the helipad to stop the arrival of the ministers. Once that ended and most people were on way back, three cars came…and mowed down the farmers…one farmer died on the spot and another in the hospital,” said Pal. He also claimed that the minister’s son was in the car which presently appears a wild, if not a deliberate, charge.

It is in Opposition’s interest to keep the matter on boil. It serves Lutyens Media too to put the skates under Yogi Adityanath’s government. Forces have been straining for a confrontation between the protesting farmers and the Modi government which the latter has been judiciously avoiding all this while. But this incident has the potential of a multiplier. Protesting farmers and their gheraos, road-blocks and “Bharat Bandh” would hit a new peak in coming days. And you could bet none of them would be keen on truth of this tragic incident.