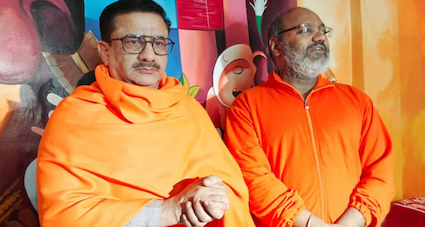 The conversion ceremony was conducted by Mahant Narasimha Ananda Saraswati of Dasna temple in Ghaziabad, Uttar Pradesh and Rizvi will now be known as Jitendra Narayan Swami.

“I was expelled from Islam. After that, it is my choice to practice and preach the religion of my choice. “Today, I chose to convert to Hinduism. Sanatan dharma is the first dharma of the world. I respect Sanatana dharma. It is full of believing in humanity,” he said.

Mahant Saraswati also informed that Rizvi had approached him in November for embracing Santana Dharm. Rizvi has also given the right to light his pyre to Mahant Saraswati and said he wanted his body to be cremated after death.

Rizvi gained headlines when he moved to the Supreme Court appealing to it to remove 26 verses of the Quran, claiming that they encourage terrorism. Muslim clerics expelled Rizvi from Islam for his “objectionable comments” against the religion and even announced that announced no place would be given for his dead body in a graveyard after his death.

Rizvi has also released a book in November titled “Muhammad” after which AIMIM chief Asaduddin Owaisi filed a complaint against Wasim Rizvi for his ‘blasphemous statements against the Prophet’ and asked for strict action.