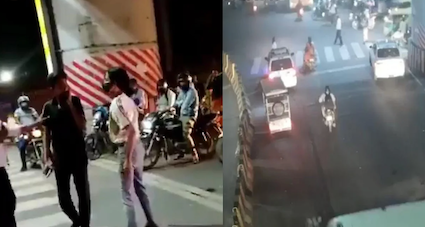 A video incident of road rage from Lucknow last week is making rounds on social media in which a young girl can be seen repeatedly slapping a cab driver alleging that she was hit by the cab while crossing the road.

However, the CCTV footage shared by verified Uttar Pradesh media network on Twitter shows how the girl decided to cross the road amidst heavy traffic even without waiting for the vehicles to stop. It must be noted that the traffic lights were not functioning properly, and traffic police officers could be seen controlling the traffic.

While the woman could be heard saying in the video that the cab had hit her, the CCTV footage from another angle of the traffic signal does not show the woman being hit by the vehicle.

The woman, in a fit of rage, also broke the cab driver’s phone who asked for women police to be called as he was being assaulted. Towards the end of the video, the woman was also seen thrashing another man who tried to intervene, warning her to not hit the cab driver.

Meanwhile, the cab driver identified as Sadat Ali Siddiqui said that after the incident police took both him and the woman to the police station and the police filed a molestation case against him based on her complaint.

However, it turned out that the case is different from what the girl narrated in her complaint. The city police have booked that girl under sections 394 (voluntarily causing hurt in committing robbery) and 427 (mischief causing damage) of the Indian Penal Code (IPC). FIR has also been filed against her.