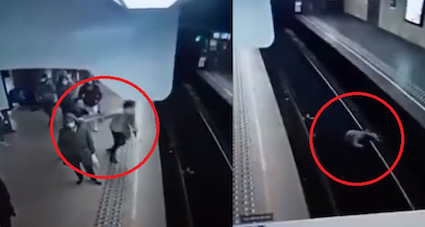 In a horrifying incident a man was seen deliberately pushing a woman into the path of an oncoming subway train.

In a 30 second video which was recorded on the Brussels station CCTV,  a man in a black T-shirt sneaks up behind a woman and gives her a big shove. The woman loses her balance and tumbles onto the tracks, right in front of the approaching train.

Luckily, the metro train operator reportedly saw the person on the tracks and stopped just in time by pulling the emergency brake

The Brussels police said the man who committed the crime has a history of mental illness and may have been homeless. He was later arrested and investigation into the incident is underway.