Watch: How Chahal poked fun of Siraj in the midst of an interview 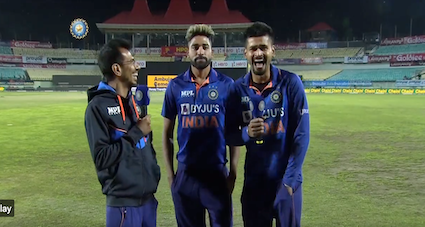 India’s wrist spinner Yazuvendra Chahal was interviewing man-of-the-series Shreyas Iyer at the conclusion of the T20 series against Sri Lanka in Dharamshala. Only to see his young team mate, fast bowler, Mohammad Siraj gatecrash into the interview.

Chahal wasn’t to let go on Siraj: He poked fun at the young fast bowler in good spirit, stating his hair looked like the grass which has soaked water dry. Watch below:

Chahal runs his own YouTube channel Chahal TV which is quite popular on social media.

While commenting on his splendid run in the series, Iyer said: “I wanted to pace my innings in a particular manner because I was confident about taking on any bowlers once my eyes are set, which would also help the team reach a desired total.”

Iyer finished with 204 runs in the series, including three consecutive fifties.

Iyer has also been named captain of the Kolkata Knight Riders in the upcoming IPL season.