Watch how CSK celebrated Deepak Chahar’s proposal to his girlfriend 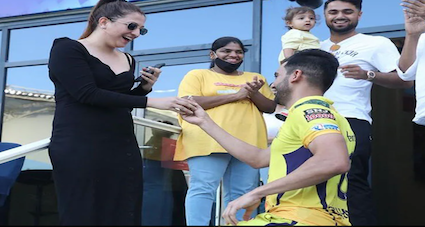 It might not have been a good day on the cricket field for Chennai Super Kings players after losing from Punjab Kings but CSK pacer Deepak Chahar made sure it was a memorable day for him. He proposed to his girlfriend, Jaya Bhardwaj, in the stands moments after the end of this team’s Indian Premier League 2021 match in Dubai.

While the videos and photos of Chahar going down on his knees went viral, his team members also made the moment even more special for the new couple.

The couple were welcomed to a special reception back at the hotel by the Chennai franchise’s members. As soon as the pair cut the cake, CSK skipper MS Dhoni took hold of Chahar from behind, while Krishnappa Gowtham got hold of his legs as the likes of Suresh Raina, Ravindra Jadeja, Robin Uthappa and others plastered him with cake and some other substance they brought with them in a bottle.

Deepak had initially planned the proposal act during the playoffs of the T20 league but Dhoni had advised Chahar to do that before the playoffs probably to not let his players get distract from the all-important stage.