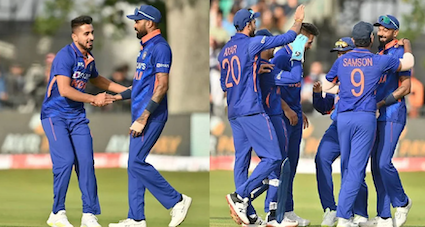 Ireland gave India a run for their money despite the visitors posting a daunting total of 225/7 in the second T20I at the Malahide Cricket Club in Dublin.

Displaying bravery in their batting, the Andy Balbirnie-led side pushed the match to the final delivery, but ended up four runs short.

With George Dockrell and Mark Adair both in an explosive mood, India captain Hardik Pandya turned to young pacer Umran Malik, playing just his second game for the country, for the final over, with Ireland needing 17 off it.

Umran started well as he beat Adair for pace and got a dot ball off his first delivery. He beat Adair again with his next delivery, but was then penalized for overstepping.

The free hit was smashed through cover for a boundary and Adair followed it up with another boundary that came off a thick outside edge.

The equation was suddenly down to eight runs needed off three deliveries, and the momentum on Ireland’s side.

However, Umran held his nerve to give away only three runs off the next three deliveries and seal a 4-run win for India.

Hardik Pandya revealed after the match why he turned to Umran for the final over.

“I was trying to keep all the pressure out of my equation. I wanted to be in the present and I backed Umran. He has pace, with his pace it’s always going to be tough to get 18 runs,” he said.

Earlier, a maiden international century for Deepak Hooda and Sanju Samson’s 42-ball 77 powered India to a total of 225/7.

However, Paul Stirling started off Ireland’s fightback with his 18-ball 40. Balbirnie then went on to hit 60 off 37 balls.

With the win, India swept the series 2-0.