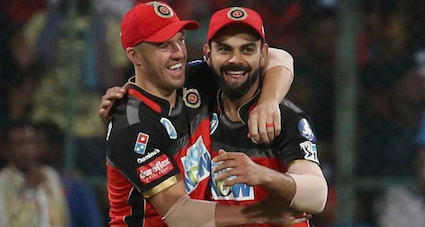 Virat Kohli is no longer the captain of Royal Challengers Bangalore. Nor is the team’s lynchpin, AB de Villiers around. Virat Kohli has now shared a very emotional moment which happened due to a video message the South African sent him.

The RCB social media team on Tuesday uploaded a video in which Virat Kohli can be heard speaking about AB de Villiers.

In a video shared by RCB, Virat Kohli spoke about how much he missed AB De Villiers and also spoke about how the South African informed him that he is going to quit playing for the Royal Challengers Bangalore in IPL. He said

“I clearly remember when he finally decided to finally call it a day. He sent me a voice note and I still remember we were coming back from EC and I got this voice note while I was driving back home. I remember that I listened to it and Anushka (Sharma) was with me and I just looked at her (in disbelief),”

He further added “My face fell, then I showed her the message and the VO. The first thing she said was ‘don’t tell me’. She knew because I kind of had the impression. It was a strange feeling, I got very emotional and the VO was very emotional when he said, ‘look, I dont have it anymore in me.’ I have shared so many moments with him the highs and lows, he has been right next to me.”

“If we (RCB) manage to win the title, I would be very emotional thinking of him first. Rather than what I would experience, I would actually think of him of how much it would still mean to him. He is a special human being. I don’t think there is one person who can say AB has not contributed in our lives.”

Royal Challengers Bangalore under the captaincy of Faf du Plessis made a losing start to their campaign after being beaten by Punjab Kings in their opening match.