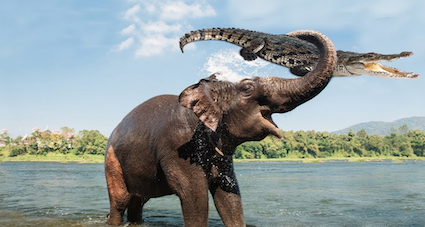 A video of a mother elephant killing a crocodile to protect her young calf has gone viral.

The wildlife app Latest Sightings shared the footage to its 2.55 million subscribers, saying that they’ve never seen an elephant attacking a crocodile before.

“This mother elephant was not taking any chances and was not happy with the crocodile being so close to her young calf. To protect her calf, she removed the threat of the crocodile entirely. You can see the elephant is lactating,” it said.

The mother elephant can also be seen wrapping her trunk around the crocodile’s tail and tossing it around while trampling it.

Hans Henrik Haahr, who filmed the footage while on safari with a group, said he had almost no words to describe the interaction, “just that it was shocking!”

Social media users were left in awe, saying that this is the type of wildlife sightings. One user said, “It’s amazing how the elephant kept its tail up throughout the incident.”

India is looking at near close to double-digit growth this year and the country will be one of the fastest-growing economies, surpassing China. Chief...

Warehouse converted into Church in Delhi; VHP raises a storm

Yogi to roll out six Yatras ahead of polls; to break barriers of casteism